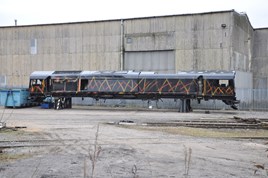 The Class 66 was damaged when it derailed at Carrbridge in January 2010 and ended up down an embankment.
DB Schenker stored the locomotive, which never returned to traffic. It was sold to C F Booth's earlier this year, and has been re-sold to EMD. Its bogies have been retained by DB it is understood.
The Class 66 arrived in the UK on January 4 1999, and was in traffic for 11 years.

First seven Pacers to be withdrawn by Northern this weekend