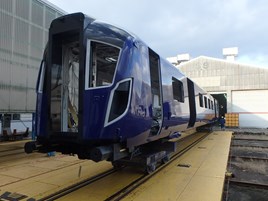 All 70 Class 385 electric multiple units for ScotRail will be accepted by December 2018, although not all may be in traffic by then.

Testing of the first ‘385’ in Scotland is scheduled to begin in October, with a second train joining it in November and a third in December. Testing will be conducted at night.

And ScotRail has confirmed the rollout plan for the £370 million fleet, which is currently being built by Hitachi. Driver training for ScotRail drivers is scheduled to start in March 2017, with approval secured for daytime running expected in May 2017.

The first line to receive the trains will be Edinburgh-Glasgow Queen Street via Falkirk High. This is currently being electrified, and the first ‘385s’ will begin operating passenger trains on it in autumn 2017. In the meantime, EMUs will begin operating on this route from this December - these will be Class 380s cascaded from Ayrshire routes.

By December 2017 all trains on the Edinburgh-Glasgow route are expected to be Class 385s. These will be a mix of three-car (46 are on order) and four-car (24 are on order) variants. SR said that by December 2018 eight-car trains will be introduced.

Note:  Class 385 introduction on the Shotts route is to be confirmed, depending upon electrification.