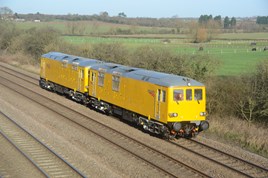 Rebuilt by Railway Vehicle Engineering Ltd, 73951 and 73952 have begun regular tests on the main line, running solo and as a pair (RAIL 793).

They have been rebuilt from 73104 and 73211 respectively, with two Cummins QSK19 engines each capable of 755hp under diesel power. The engines have 40% greater fuel efficiency compared with the 600hp English Electric 4SKRT engine that was previously fitted.

RVEL Engineering Director Paul Riley told RAIL on February 8 that testing of the rebuilt electro-diesel locomotives has been going well, and that one of the next steps was to begin testing the locomotives hauling trains.

He said that principally this has yet to happen because of the lack of available drivers. Drivers are supplied by Colas Rail, but they have been employed on infrastructure monitoring trains.