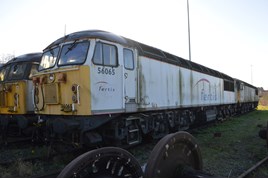 Class 56s could be re-engineered with new power units as a cost-effective solution to the freight industry’s need for heavy haul locomotives.

UK Rail Leasing aims to re-engineer one of its 15 Type 5s, and says a locomotive could be ready by the end of 2017. The Leicester company says it has identified as many as seven operators (home and abroad) that may require such locomotives.

UKRL Head of Engineering Alan Lee told RAIL: “I’m not making the decisions, I want the freight companies that may be interested strategically in repowering as an option to actually help define what the end product will be. There’s a great opportunity there for freight to have a real hand in what it looks like."