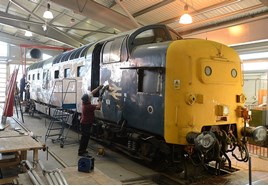 Restoration of 1960s Deltic 55002 King’s Own Yorkshire Light Infantry (KOYLI) reached a significant milestone in mid-January when the remaining old blue livery was removed at Locomotion, the National Railway Museum in Shildon.

The locomotive is being restored for a role alongside steam locomotive 60163 Flying Scotsman at the museum’s ‘Stunts, Speed and Style’ display, which will take place at the York site from March 25.

By removing the blue livery, restorers are now able to repaint KOYLI in its 1960s two-tone green British Railways livery, complete with its original number (D9002).

The display will be KOYLI’s first public appearance in its original livery since it entered the National Collection in 1981 as the chosen preservation representative from the Deltic class. It will be fitted with an original thistle headboard from the Flying Scotsman service, having received significant body work and cosmetic restoration not just for the event in March, but also for subsequent operation on preserved lines.

The ‘Stunts, Speed and Style’ event will reunite four of the locomotives that hauled the Flying Scotsman passenger service since 1862. As well as 60163 and KOYLI, two Great Northern Railway locomotives will appear. KOYLI represents the shift from steam to diesel power, and was the last locomotive to haul the service during this era.

“Now in its full undercoat it’s really starting to look like the instantly recognisable Deltic that so many know and love.”

‘Stunts, Speed and Style’ will run in the Great Hall at the National Railway Museum in York from March 25 to May 8.

FROM THE ARCHIVES: Pacers: the unlikely local heroes...

GRAEME PICKERING looks at the past, present and future of these units, which have provided the backbone for many services over three decades