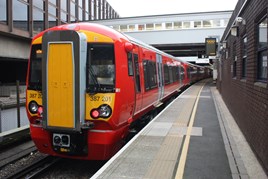 Rail Delivery Group’s new chief executive Paul Plummer has highlighted how the industry is spending £9.3 billion on new trains by the end of the decade.

“We know that fare payers want better trains, so this investment over the next four years is great news for our passengers,” he told delegates at a rail conference in Derby on November 27.

“An average of 12 carriages per week are being built to meet demand - a far higher build rate than just a few years ago. More than half of the new trains are being built by British-based manufacturers, supporting more than 2,000 jobs including at least 100 apprenticeships.”

His claim was backed up by Rail Minister Claire Perry, who said: “Introducing more modern, high-quality trains is central to our commitment to give passengers better journeys and boost economic growth.

“We’re already making massive improvements through franchising - such as removing Pacer trains from the north of England with requirements for at least 120 new-build diesel vehicles, and introducing new trains on the East Coast, Great Western and Thameslink lines.

“We are also pressing ahead with our plans for electrification, which will enable faster, greener, electric trains to run on large parts of the UK’s rail network.”