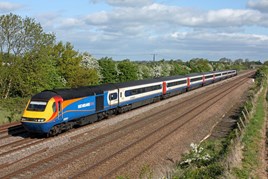 “We expect the competition for the next East Midlands long-term franchise to deliver those improvements to the rolling stock that are required.”

That was the response from Transport Minister Claire Perry on November 4 to a Commons Written Question asking what plans the Secretary of State for Transport has for replacement of HST trains on the Midland Main Line.

Perry had told Philip Hollobone (Conservative, Kettering): “The Department considers that franchisees are normally best placed to procure the rolling stock that they require to deliver the necessary levels of service and capacity.”

Under the Department for Transport’s present plan, published in July 2015, the East Midlands Trains franchise is due to end after the current Direct Award extension on March 4 2018, although the Transport Secretary can extend this by up to a year.