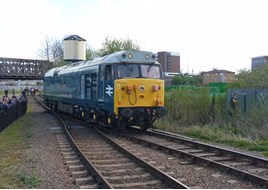 Preserved 50008 Thunderer is being prepared for an imminent return to the main line.

The locomotive has undergone an extensive six-figure rebuild at Washwood Heath, and has been fitted with a zero hours power unit.

This means that the Class 50’s engine is to the same standard as a freshly overhauled locomotive leaving Doncaster Works in the early 1980s. The power unit fitted was the last to be overhauled by Crewe Works, and has not been used since.

The electrics on the locomotive have been refurbished, as has the generator. New electronics and batteries have been fitted, along with standard safety equipment including On Train Monitoring Recorder (OTMR) and Train Protection Warning System (TPWS), for use on Network Rail metals. The Class 50 has also been fitted with GSM-R signalling equipment.