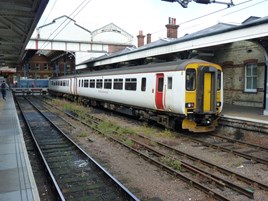 As this issue of RAIL went to press, trains had not run between Marks Tey and Sudbury for a week because of a shortage of available Abellio Greater Anglia diesel multiple units.

Trains have also been cancelled for a similar period on the Felixstowe branch. Buses have replaced trains on both routes.

“The problems are due to some of our diesel trains suffering wheel damage as a result of poor rail conditions,” said AGA spokesman Lucy Wright.

“This situation leads to excessive wear on the wheels, which must be repaired before the trains can re-enter service. On average we are currently seeing two trains arrive back at the end of each day with wheel damage, more than double the rate we have experienced in previous autumn periods.”

DMUs usually have their tyres turned at Ilford, but because of capacity constraints they have also been visiting Derby Etches Park.

On November 11, of the 26 DMUs 11 were out of traffic. Various routes in Norfolk, Suffolk and Cambridgeshire had trains cancelled.

Routes in Norfolk, Suffolk and Cambridgeshire had trains cancelled.

AGA has been forced to hire DMUs from East Midlands Trains, while its hired rake of Mk 2s and Class 37s from Direct Rail Services has been pressed into more work than booked, to cover for unavailable DMUs.

Wright said: “We are doing everything possible to repair the trains affected as fast as we can, including sending trains to other locations with spare capacity for wheel repairs - to speed up the process of returning trains back into service - and seeking to hire additional trains temporarily, although other train operators are suffering similar problems, so we have not yet succeeded.

“We are working with Network Rail to try and improve rail conditions, to prevent further damage. We hope that the situation should improve and that we will be able to eliminate these cancellations and restore the normal service. In the meantime, we are seeking to minimise the impact of the disruption by providing bus replacement services wherever practical to cover for the cancelled train services.”