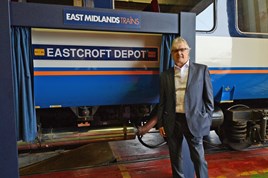 Towle, from nearby Trowell, recently completed 56 years of rail service. And it was his long service that prompted EMT to select him to name 158773, which is one of 25 Class 158s based at the depot. His son Ashley now also works alongside him as a technician.