EXCLUSIVE Behind the scenes look at rebuilding of DRS '37/4s' 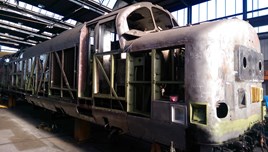 Railway Vehicle Engineering Ltd is midway through a major overhaul of Class 37/4s that are destined for a return to the main line 15 years after they were withdrawn.

Direct Rail Services bought 37407 and 37424 from preservation earlier this year. Neither has hauled a train since EWS withdrew them in 2000. They had been stored at the Churnet Valley Railway since June 2008, having been sold in December 2007.

DRS moved them to RVEL’s Derby headquarters in April this year, with 37424 arriving on April 1, and 37407 arriving the following day. They have since been joined by 37413, which has also been bought from preservation despite having never been used. It too is to be overhauled.