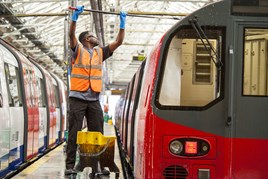 The modernisation of the 106-strong 1995-Stock fleet on the London Underground Northern Line has been completed. Alstom, which built the fleet originally, has worked with LU to finish a two-year upgrade programme. The programme, at both the Morden and Golders Green depots has replace 11 kilometres of lino on the fleet – equivalent to the distance between Buckingham Palace and the O2 arena, polished 15,688 windows to remove graffiti (more panels of glass than in the Shard) and changed 27,500 seat backs – equivalent to a third of Wembley Stadium.

Passenger information systems have also been upgraded, while wheelchair spaces have also been fitted. Approximately 35,000 components per train have been replaced – about 3.7 million across the entire fleet.

Alstom Transport UK Managing Director Urban & Services, Piers Wood said: “The team working on the project has done a fantastic job and I am sure most passengers didn’t realise what was going on until they got into a refreshed train on their commute to work for the first time”.

Northern Line Trains Performance Manager Stevyn Walder added: “Thanks to this refurbishment, Northern line trains are looking better than ever before. Customers travelling on the Northern line can now expect a cleaner and more comfortable environment to brighten up their journeys.”

Around a quarter of Tube passengers - about one million people per day Monday to Friday – are carried on the Northern Line, which requires 96 trains to be available for passenger service in both the morning and evening peaks. The first train enters service at 0500, with the last train returning to the depot the following morning at 0200. The entire fleet travels around 15 million kilometres every year.