IEP Class 800 moves under its own power in tests 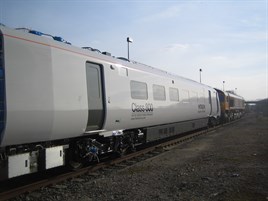 The pioneer Class 800 in the UK has been moved under its own power at Old Dalby, where it has been undergoing recommissioning and initial tests ahead of main line testing that was due to begin as this issue of RAIL went to press.

The set (800001) has undergone comprehensive testing on the closed test track at Old Dalby, and now moves to a Signal Protected Zone (SPZ) on the East Coast Main Line.

Hitachi spokesman Susan Lawson told RAIL: “The testing programme is progressing well and we are on track to complete on schedule.”