For the Fallen ‘91’ designated for National Collection 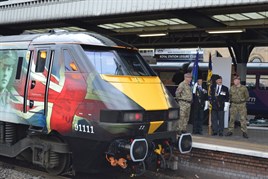 The Board of Trustees of the Science Museum has ratified the designation of Virgin Trains East Coast 91111, For the Fallen. The designation includes the locomotive itself, its nameplates and its wraparound commemorative vinyl.

The Railway Heritage Designation Advisory Board, chaired by Lord Faulkner, made the recommendation after he attended the dedication ceremony at London Kings Cross. It was approved by the Science Museum Trustees on March 4.

Designer Paul Gentleman and East Coast worked with five regiments along the East Coast Main Line to create the livery which carries images and stories from the Great War.

Gentleman said: “I am absolutely thrilled and honoured that this livery will now be preserved long after the locomotive’s working life comes to an end. As far as I’m aware this is the first time a livery has been designated.”

The locomotive is operated by VTEC on lease from Eversholt Rail Group.