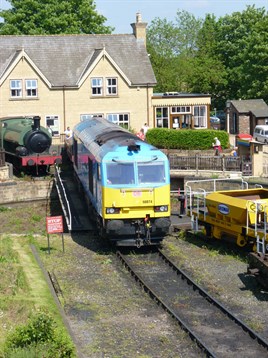 Speaking exclusively to RAIL, DB Schenker Chief Executive Geoff Spencer said that although there had been no overhauls for the past year, that did not mean the Class 60s were not still part of the company’s thoughts.

He said that prior to their ‘Super Sixty’ rebuild, the locomotives hadn’t been used to their full potential. Post-overhaul, they are like a brand new machine, at a lower cost than a brand new locomotive.

Spencer added that DB had no plans to buy new locomotives, explaining that reliability of the Class 60s as well as the Class 66 fleet was constantly improving.

While the company has no plans to buy new locomotives, it is investing in new wagons, with orders due to be announced. Spencer was coy on details, but hinted that they were likely to be for the aggregates market, an area he believes will be very lucrative for Britain’s largest freight company. That is the market where the powerful Class 60s could be used, he added.

For more on this story, read RAIL 767, published on February 4.