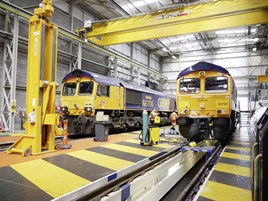 Construction of all the remaining 15 of GB Railfreight’s order of 21 Class 66s is now in progress in the Electro-Motive Diesel factory in Muncie, Indiana. The underframe of the final locomotive (66772) is currently being assembled.

This follows the first five locomotives (66752 The Hoosier State, 66753-756) entering the country via Newport Docks on July 11 (RAIL 753). With construction well under way as RAIL went to press, seven of nine of the second batch (66757-765) were undergoing final testing. They are due to be shipped to the UK in mid to late August and will arrive here in mid to late September. How long they take will depend on whether the ship has to make a detour to pick up more cargo, as with the first batch where a stop in Albany (New York) was required.

There will then be a final batch of seven due to arrive some time in November/December.

They must all arrive before the end of the year to meet EU regulations on engines that don’t comply with Stage IIIB emissions requirements. The new regulations come into force from December 31 (see feature, pages 58-63).

66752 ran in traffic for the first time on July 29, running from Doncaster to Toton and then on to Crewe. It was expected that the other four locomotives, which are now at EMD’s maintenance depot at Doncaster Roberts Road, would begin entering traffic as RAIL went to press.

EMD International Program Manager Tony Abboreno told RAIL: “They won’t all go out at once. As soon as they’re ready, they’ll go out.”

Between arriving at Newport on July 11 and entering service around three weeks later, a series of commissioning tests was required.

“When they’re at the dock, we just verify that the brakes are active and ready to go,” Abboreno added. “Then they’re considered ‘dead on train’ which is where they’re just like a wagon.”

They were hauled by GBRf 66737 Lesia to Doncaster Roberts Road, where they have been undergoing pre-delivery inspection tests. These involve checking every component of each locomotive to make sure they are fit for service.

At the same time, any minor damage incurred during shipping is rectified - this is often just minimal scuffing to paintwork. Modifications that are required are also made - from the fitting of GSM-R and TPWS equipment, for example, right down to painting the air pipes white and water pipes blue to comply with UK standards.

Roberts Road is responsible for maintaining all of what will be 71 GBRf ‘66s’ by the end of the year (currently 55), as well as 19 for Direct Rail Services.

The new ‘66s’ have some slight changes inside the cab from previous members of the class. GBRf train managers who already have training on the new layout will initially drive the new locomotives, while other drivers are trained.

Abboreno said: “The changes are incidental. There are a couple of read-outs on the screens that the drivers have never had before. As an example, they have a read-out for fuel now. The older units don’t have that.”

As RAIL went to press, the initial work for the locomotives had not been decided but was expected imminently.