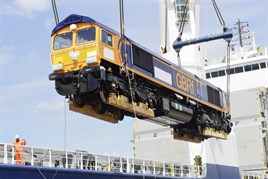 Five brand new Class 66/7s were off-loaded at Newport Docks on July 11, after arriving in the UK by ship from America.

GB Railfreight welcomed 66752-66756, which have been built by Electro-Motive Diesel (EMD) in Muncie, Indiana. These are the first ‘66s’ built for Europe at Muncie (RAIL 751), although EMD has built ‘66s’ at the factory for Gabon.

This is the first batch of an order of 21 locomotives ordered by GBRf (RAIL 741), and forming part of the company’s largest ever investment in new locomotives.

“As a company, we have had an exceptional year. These locomotives will allow us to grow our business further in 2015 and continue to provide our customers with the optimum level of service, signifying the confidence we have in the development of the UK rail freight sector and helping us keep the UK economy moving.

“We have been working closely with EMD on this project, and I want to thank them for all their hard work and dedication in reaching this point. We hope to continue this relationship throughout the rest of the manufacturing and delivery process.”

Progress Rail and EMD President and CEO Billy Ainsworth said: “I am extremely pleased that after an exhaustive search of different options available, GBRf selected the EMD Class 66 locomotive, as it provides optimal product life cycle cost through its durability, reliability and sustainability. GBRf’s decision reinforces EMD’s position as the leading locomotive provider in the markets we serve.”

After a three-week journey across the Atlantic from the port of Norfolk in Virginia (the voyage included a detour to Albany, New York, to collect extra cargo), the five locomotives arrived on board HR Resolution at around 2200 on July 10, and the first locomotive (66755) was unloaded by 0830 the following day.

With 66737 Lesia on duty to shunt the locomotives after they had been carefully winched off by ship-mounted cranes, RAIL watched on the dockside as 66755 was followed by 66756, after which there was a break of several hours before unloading resumed. In the afternoon, 66754 was followed by 66753 and finally 66752 The Hoosier State, which had been named at EMD’s Muncie facility in the USA on June 10 (RAIL 751).

At 1120 the following day (July 12), the brand new locomotives were taken by 66737 to EMD’s maintenance depot at Doncaster Roberts Road for testing and commissioning. They will be based and maintained there on behalf of GBRf.

The remaining 16 locomotives in the order will arrive in another two batches, and will be arriving in the UK over the next six months.

When all 21 new locomotives are delivered, GBRf will have a fleet of 71 Class 66s. The ‘66s’ have been bought ahead of a change in EU emissions legislation - from January 2015, new regulations come into force that will have an impact on a company’s ability to obtain and operate compliant and affordable locomotives.

GBRf hopes that its latest procurement drive for additional locomotives will assist in doubling its turnover over the next three years, supporting the creation of more jobs and encouraging growth into new freight sectors.