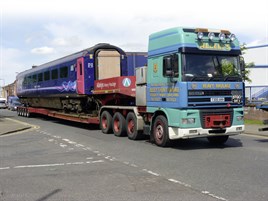 Rebuilt Mk 3 High Speed Train vehicles are entering traffic with First Great Western, having been converted and renumbered at Wabtec Rail’s Kilmarnock facility. The work is enabling FGW to increase Standard Class capacity, as agreed with the Department for Transport.

On June 7, 42564 entered traffic. This is a Standard Class (TS) trailer converted from a First Class trailer (TF). It was originally 41051, and is owned by Angel Trains.

The vehicles are also being repainted. One vehicle from this set (TF 41021) is being converted into a TS.

This work follows the conversion of five HSTs to Trailer Standards for FGW. These were 42516-42520, and were converted from redundant TRFBs (RAIL 744).