FGW updates its HSTs - by paying homage to the past 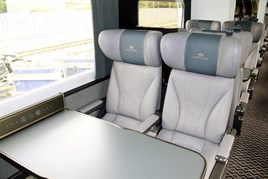 First Great Western has unveiled its latest First Class HST upgrade, and it sees the Great Western Railway reborn on the main line 66 years after it was nationalised in 1948.

The first coaches entered service in the week beginning August 18, and FGW spokesman James Davis said: “The aim was to make all of our premium products - First Class Lounges, First Class on the HSTS, and the ‘Night Riviera’ - look more modern and to reflect the ambience and heritage of the railway.”

Although the vehicles retain their existing First Great Western livery externally, almost everything is different inside. From the vestibules inwards, the GWR identity takes precedence, and FirstGroup logos are barely noticeable - a conscious decision for its premium products, says FGW.

The existing seat bases and frames have been retained, but everything else on them is new, supplied by Transcal Rail in Livingston, Scotland.

The single seats are now unidirectional, apart from one pair around a table at the end to comply with crashworthiness requirements, while at the other end a wheelchair space has been provided.

The tables, carpets, dado moquettes, interior screens and end panels are all new, while LED active dimming lighting aims to provide a consistent level of illumination throughout the coach. Light sensors adjust brightness according to ambient conditions, including tunnels.

Individual seats have three-pin power supply and two USB sockets for charging mobile devices, while those around tables have two power and two USB sockets. Provision of four of each at tables could lead to overloading of the coach’s power supply, and FGW’s research suggests that the provision in this refurbishment will be adequate.

Onboard WiFi is being fitted to the coaches as they undergo refurbishment, although this will not be widely available until the majority of the fleet is fitted.

This spells the end for Volo interactive TV screens, which have been a feature of FGW HSTs for many years. With so many passengers carrying WiFi or 3G-enabled devices, FGW believes it is now largely redundant (something confirmed by trends in usage figures).

All of the Trailer First Disabled (TFD) coaches are being refurbished by Chrysalis Rail at Laira Depot (Plymouth) by August 21 2015, with 18 Trailer Firsts (TFs) modified to First/Standard Class composite coaches by Wabtec Rail UK at Kilmarnock. The first TF is due to head to Kilmarnock for conversion in December.

The composite coaches will have 24 First Class and 39 Standard Class seats. A push-button sliding door separates the two sections.

Wabtec will also convert 24 TFs to full Standard Class. Some 447 vehicles are due to be refurbished in total, providing an extra 3,000 Standard Class seats across the FGW fleet.

It means the High Speed Trains will operate with a single TFD, one composite, Standard Class buffet car and then (depending on duty) four or five full Standard Class coaches.

Consideration is being given to refurbishing the Standard Class coaches, which have received some criticism for their lack of tables.

However, with FGW’s current franchise expiring next year, and a decision awaited from the Department for Transport on whether to award a Direct Extension or not, it is uncertain whether and how this will happen.

In line with First Great Western’s ambition to create a distinct and consistent identity across all of its premium products, this upgrade also provides clues about the impending refurbishment of the ‘Night Riviera’ Sleeper stock.

Fine details are still being decided, but it looks likely that while the bar car will retain its 2+1 configuration for sleeping berth passengers, Standard Class will revert to a 2+1 configuration, rather than the legacy First Class seats currently used.

Chrysalis Rail and FGW are investigating the best type of seat to meet the train’s dual role for overnight passengers and as an early morning commuter train through Devon and Cornwall. A final decision has yet to be made.