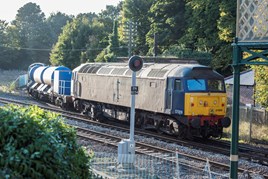 The ‘57/0’ was hauling a railhead treatment train from Dereham to Stowmarket, following maintenance.

It derailed on the point on Network Rail tracks, having left the Mid-Norfolk Railway’s tracks as planned.

Re-railing equipment was sent from Didcot and Wigan to assist in the recovery. The derailment caused large-scale disruption, with trains cancelled east of Thetford.

The disruption continued into the following morning.