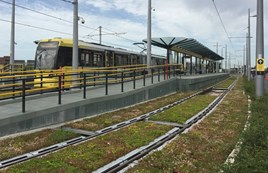 Transport for Greater Manchester (TfGM) was named a winner in two categories and was highly commended in a third at the Light Rail Awards on October 7.

The Metrolink Airport line was named Project of the Year in the projects over 50 million euros category, while the Metrolink WiFi programme to provide free WiFi on all trams across the network won the Best Customer Initiative award.

TfGM’s recently completed transformation of the Deansgate-Castlefield Metrolink stop in Manchester city centre was highly commended in the projects under 50 million euros category.

Operator RATP Dev was highly commended in the Operator of the Year and Employee of the Year categories.

Joint consultation launched looking at future of transport in Manchester