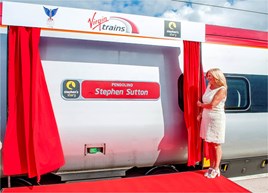 Virgin Trains Pendolino 390002  was named Stephen Sutton at Birmingham International on September 15, in recognition of a remarkable young man who touched the hearts and minds of so many. His mother Jane named the '390'.

“Stephen was an incredible person, someone from whom we can all learn so much,” commented Phil Cavender, General Manager, Virgin Trains.

“His train will be seen the length and breadth of the country from London to Liverpool, Manchester, Scotland and of course both his and our home, the West Midlands. It is only right Stephen’s inspiring story lives on and we are overwhelmed by the support of his family in allowing us name one of our Pendolinos in his honour.”

“Thousands of people will see this train travelling up and down the West Coast Main Line which will only help to reinforce ‘Stephen’s Story’ and remind people of Stephen’s message - ‘to make the most of every opportunity’.

“Having a train named after him was certainly not on Stephen’s bucket list. But maybe it should be added posthumously?”

Stephen’s Story is a Facebook blog, created by the late Stephen Sutton MBE in January 2013, after he was told his cancer was incurable. Upon hearing the news he decided to create a bucket-list of 46 things he wanted to achieve and posted this list on his Facebook page, Stephen’s Story. Top of the list was to raise £10,000 for Teenage Cancer Trust - a charity he was passionate about as it had supported him throughout his treatment at its three units in Birmingham.

Stephen’s Story went viral when he posted what he thought was his last “thumbs up” photo from his hospital bed, on 22 April, 2014. Already an ambassador and major fundraiser for Teenage Cancer Trust, Stephen captured the public's imagination in an overwhelming way in the following weeks. He inspired people across the world to donate to Teenage Cancer Trust, with the total reaching £3 million by the time Stephen passed away on 14th May, 2014.

Within a few weeks of his passing, the total had risen to £5million.