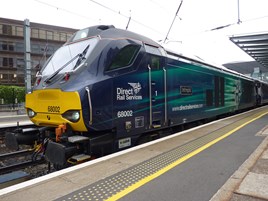 Direct Rail Services has ordered a further seven Class 68s, taking the fleet size (eventually) to 32. Currently 15 are in the UK, with deliveries of the next ten to start in the autumn.

Vossloh Espana will build the locomotives at its Valencia factory in Spain. The mixed traffic locomotives are from the company’s Eurolight platform, but because they have been adapted for the UK gauge and British regulations, Vossloh has branded them the UKLight. The ‘68s’ are owned by Beacon Rail Leasing Limited, which then leases them to DRS.

Ted Gaffney, chief executive of Beacon Rail Leasing, said: “The acquisition of the locomotives allows us to continue to grow and to support the needs of our customers and the UK rail market.”