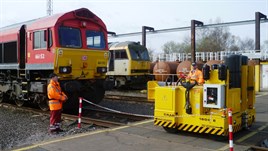 DB Schenker Rail UK has introduced new electric shunting units at its maintenance depots at Crewe and Toton, where almost 14,000 locomotive moves are undertaken each year.

The Zephir 1800e CRAB machines are capable of pulling or pushing 400 tonnes, meaning in the dry the units will be capable of moving up to three Class 66 locomotives at a time. It is estimated the new shunters will reduce CO2 emissions by 649 tonnes each year.

Until recently all DB depots used diesel locomotives. In September 2014, the company decommissioned the majority of its Class 08 fleet, using main line locomotives to undertake shunting.