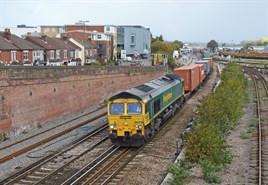 An estimated £1.6 billion is the value of benefits to Britain’s economy of rail freight, according to a new report by the Rail Delivery Group.

Research carried out in 2013 estimated that freight delivers productivity gains for British businesses and congestion and environmental benefits to a total of over £1.5 billion per year, a figure that has since risen.

The RDG report highlights how the five major rail freight operators (DB Schenker, Freightliner, GB Railfreight, Colas Rail and Direct Rail Services) transport goods worth over £30bn, from supermarket groceries to the fuel used to generate electricity. In addition, since 2006 there has been a 30% rise in the movement of containers by rail – fuelled by the consumer goods market.

While the number of freight trains has dropped by 30% since 2003, freight tonnage lifted has increased by 30% (meaning an increase in tonnage per train of over 80%), helping to reduce the number of lorries on the roads.