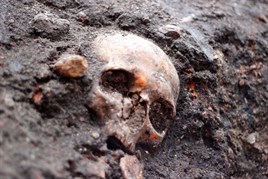 Archaeologists from Museum of London Archaeology have started excavating around 3,000 skeletons from the Bedlam burial ground at Liverpool Street in advance of Crossrail building work.

The excavation will allow construction of the new Liverpool Street Crossrail station. A team of 60 will work in shifts, six days a week to remove skeletons and record evidence for one of London’s most valuable 16th and 17th-century cemetery sites. The excavation is being undertaken by MOLA on behalf of Crossrail.

Project Manager from MOLA Nick Elsden said: “Construction for Crossrail is providing opportunities for archaeologists to study areas of London that would ordinarily be inaccessible.”

Archaeologists are expected to finish on site in September, after which construction will proceed. Preliminary excavations at the Liverpool Street site in 2013 and 2014 uncovered more than 400 skeletons and numerous artefacts.