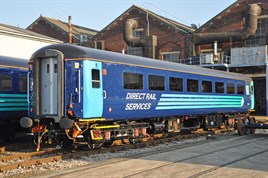 Locomotive-hauled Mk 2 coaching stock is to make a return to daily passenger trains in the North West, under a plan to maintain the current service level and capacity on key routes, the Department for Transport announced as part of a rolling stock plan on January 8.

The need for increased capacity on the Cumbrian Coast line – and the cascade of six Class 156 DMUs operated by Northern on a sub-leasing basis to First TransPennine Express means that the 2012 trial of workers’ trains to the Sellafield nuclear site can now be put on a more permanent footing from the May timetable change.

TPE needs the DMUs as a result of losing five of its Class 170s to Chiltern Railways, following a decision made by rolling stock leasing company Porterbrook. It is expected that the remaining four TPE ‘170s’ will move south in 2016.

In addition, a further six Class 319 EMUs for Northern – taking the total up to 20 - will allow for a more speedy roll-out of electric services between Liverpool and Preston from the autumn, as well as for Manchester Victoria and Liverpool route from the May timetable change, allowing for the strengthening of DMU routes operated by Northern.