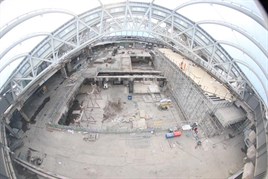 Throughout January and February, glazing will be installed on the shop fronts and the flooring of the new concourse will be completed. In March, demolition beneath the new atrium will be complete, allowing the whole of the concourse to be open to natural light for the first time. In May, a major train crew facility will open within the station, bringing staff in from their temporary accommodation. And the first part of the main wall separating the new and old station will also be removed to allow services to be connected, and the building work to operate both parts as one station can begin.

Over the summer, the new concourse will be fitted out with finishes to the waiting rooms, shops and public facilities and Navigation Street bridge will reopen to the public. The remainder of the station's main wall will be removed and all final finishes will be completed.

The five-year redevelopment of Birmingham New Street began in April 2010 and the first half of the new concourse was opened three years later in April 2013.