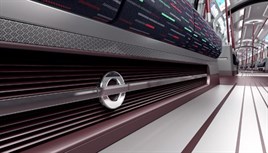 An order for 250 new generation Tube trains is expected to be worth between £1 billion and £2.5bn. The ‘New Tube for London’, unveiled by London Underground and the Mayor of London, will enter service in the mid-2020s and provide deep-level air-cooling for the first time on the network.

A formal Invitation to Tender is likely to be issued early next year, with a contract to build the trains awarded in 2016. Transport for London expects the first train to enter service on the Piccadilly Line in 2022.

When LU placed a notice in the Official Journal of the European Union (OJEU) earlier this year, seeking expressions of interest,
a shortlist of bidders was formed: Alstom, Siemens, Hitachi, CAF and Bombardier.

TfL has worked with transport design specialist PriestmanGoode to come up with a design that is modern and functional, while echoing the Tube’s recognisable heritage. It is intended that the new trains will serve on the Underground for more than 40 years and will be capable of fully automatic operations.

Campaign for Better Transport’s Chief Executive, Stephen Joseph told RAIL: “Driverless trains may save money and improve operations, but - as with driverless cars - people will want reassurances about safety. There is still a long way to go before fully driverless trains can be accepted, especially on a system as old as that in London”.

TfL says that initially the trains will have an operator on board.

Alongside modernised signal systems, the new trains are projected to provide increased capacity as follows:

The plan is to introduce the trains on the Piccadilly Line first, followed by the Bakerloo, Central and finally the Waterloo & City lines. Along with air-cooling, the new trains will feature step-free access from the platform and walkthrough gangways, as on the new S-Stock trains on the sub-surface lines.