LU seeks supplier to build up to 68 new Tube trains 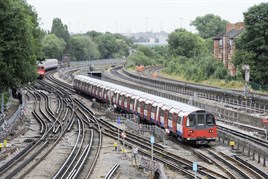 London Underground has begun its search for a supplier for 68 additional trains, as part of its overall plan for boosting capacity on the Jubilee and Northern Lines. The figure breaks down as up to 50 trains for the Northern Line and 18 for the Jubilee Line.

LU has placed a notice in the Official Journal of the European Union seeking expressions of interest for the contract. A formal Invitation To Tender is expected to be issued early next year.

The new trains will increase capacity on the Jubilee Line by 13% and on the Northern Line by 25%.

“By combining the orders for new trains for two lines, we will ensure that their delivery represents value for money for our customers.”

Of the 50 Northern Line trains, five are earmarked specifically for the proposed extension from Kennington to Battersea, on which a decision to the Transport and Works Act Order application is expected in the autumn.

In the meantime, LU has announced its intention to award the contract for the design and build of the extension to Ferrovial Agroman Laing O’Rourke. Worth around £500 million, the contract will run for six years and cover the main scope of the construction.

Total cost of the extension is expected to be up to £1 billion. The work will be funded entirely through developer contributions from Battersea Power Station, other developers and (from 2016) a new Enterprise Zone.

LU Managing Director Mike Brown said: “It is vital that our proposal is delivered cost effectively for our passengers, taxpayers and the local boroughs and developers who are helping to fund the extension.”

The contract award follows a competitive procurement process that began last year. Ferrovial Agroman Laing O’Rourke was announced as the preferred bidder in July, when it became the successful party from a shortlist of four bidders (including Balfour Beatty/BAM, Bechtel/Strabag, Costain/Murphy) that had been whittled down to just two (the other was Balfour Beatty/BAM) in May.