“You ain’t seen nothing yet!” 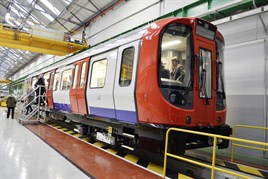 One billion passengers a year… 249 miles… 426 escalators… 19,000 staff… the London Underground is a gargantuan network.

In the past decade it has experienced unprecedented growth in passenger numbers, and those numbers are expected to increase further in the next few years.

With a network that in places dates back to 1863, regular maintenance is inevitable and essential. Over the years many improvements have been made, but the recent growth has signalled the start of a major upgrade, with every part of the operation looked at in detail.

The overall upgrade, known as the Tube Improvement Plan, began in 2006. It will cost around £10 billion to 2017/18, and has specific core aims: to increase capacity; to run more trains; faster journey times; to improve reliability; and to increase accessibility (step-free access, for example).

From those aims, LU identified three areas on which to focus: upgrading lines (mainly trains and track); upgrading stations; and improving accessibility.

Most visible of the upgrade work so far has been the introduction of new S-Stock trains on the Metropolitan, Hammersmith & City, Circle and (imminently) District Lines. This sub-surface stock replaces the A-Stock, C-Stock and D-Stock that ran previously, and brings much-desired air-conditioning to the Tube.

A total of 191 S-Stock trains have been ordered from Bombardier, and they will be running full service on all of the aforementioned lines by 2016. The 1,000th vehicle (of a total 1,738) was unveiled at Bombardier’s Litchurch Lane facility in Derby on December 12 2013.

Since the start of the programme in 2006, other major improvements have already been made. Most notably, an increase in reliability has seen overall delays reduced by 40% since 2011, with a further 30% reduction expected by 2015.

The Jubilee Line upgrade was completed in 2011. Trains now run every two minutes in the peak, able to transport up to 12,500 passengers an hour.

The Victoria Line has also been upgraded - a new overlay signalling system and control centre means that 33 trains an hour can operate, transporting an extra 10,000 passengers. The 2009-Stock from the same family as the S-Stock (Movia, built by Bombardier) is a big part of that upgrade.

King’s Cross is one of several Tube stations that has been upgraded. The Underground segment was completed in 2009, quadrupling the size of the station. Stratford was also entirely redeveloped ahead of the 2012 Olympic Games, so that it could efficiently serve passengers travelling to the Olympic Park.

Meanwhile, a much wider station upgrade means WiFi is now provided at 120 stations, with more to follow.

In 2014 new signalling systems will be installed on the Northern Line, increasing the frequency of trains and enhancing capacity.

And from 2015, a 24-hour night-Tube service is planned to run on Fridays and Saturdays on most of the Northern Line, the entire Jubilee and Victoria lines, and parts of the Central and Piccadilly Lines.

Transport for London is already looking at improvements further into the future, with plans for new trains on the Piccadilly Line by 2022. This is part of the Deep Tube programme that will see new trains and signalling on the Bakerloo and Piccadilly Lines, as well as the planned extension of the Northern Line out to Battersea and eventual replacement of the Central Line trains.

With so much going on, and demand for the Underground at an all-time high, there is no doubt that the network will continue to evolve, with yet more improvements planned over the coming years.

It may now be 151 years old, but the Underground is anything but outdated.