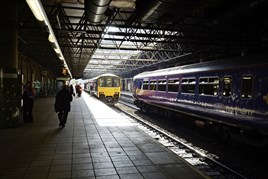 It was voted one of the UK’s worst stations in 2009, but Manchester Victoria is now enjoying a remarkable renaissance.

I first got to know the place back in the early 1970s, as a young teenager. Then it was a sprawling mess still caked in the soot, muck and atmosphere of the steam age, where the only real change had been to swap steam and smoke for diesel fumes. An awful lot has changed since then, so here’s a look at its past, present and future…

The first station on the site was designed by George Stephenson, and opened on New Year’s Day 1844. Some of the original buildings still remain, and can be seen along Hunts Bank abutting the Edwardian facade.

Services increased over the next 65 years, and in 1909 the Lancashire & Yorkshire Railway opened an expanded 17-platform station.

An impressive four-storey Sandstone ashlar office block, with a 160 yard-long facade in neo-Baroque style, was designed and built by William Dawes. This better reflected Manchester’s recently acquired status as a hub of commerce for the British Empire, and confidence in the railways as the nation’s transport artery.

In 1922 the bronze plaques and statues of the First World War war memorial were added under the tiled map of the L&Y network, next to the booking office. Sadly, little of the grand Dawes building retains its original functions, although the domed First Class dining room still serves refreshments - albeit with more packaging and far less style!

The next decades told a story of gradual decline, as Britain’s role as the world’s workshop waned. The station suffered Second World War bomb damage, and then BR neglect before sustaining further injury at the hands of the IRA.

By the 1980s its decline was compounded by the opening in 1988 of the Windsor rail link from Salford Crescent to Ordsall Lane. This diminished Victoria’s importance, allowing it to be bypassed by trans-Pennine express services that it lost in 1989.

Worse was to come in the early 1990s, when a massive rebuilding and rationalisation scheme was given the go-ahead.

The entire Northern side of the station was rebuilt - two of the six through platforms and all the freight loops were lost, and the area was entombed beneath the unattractive MEN arena.

On the south side more bays were lost, when the area was rebuilt to accommodate the Manchester Metrolink platforms as part of the Bury line’s conversion to a tram route. To compound matters the Manchester loop to the east of the station also closed. Sadly nothing was done to refurbish the roof over the Southern platforms, which continued to decay.

The end result was a butchered station reduced to four through platforms and two bays, with a car crash of architectural styles that ranged from faded Victorian, through Baroque Edwardian, to modern brutalism. To many it was the nadir of the station’s fortunes.

Further heavy rail services were lost on October 3 2009, when the Oldham loop closed for integration into the Metrolink network.

Also that year, in their Better Rail Stations report for Government by its ‘Station Champions’ Chris Green and Sir Peter Hall, the station was identified as Britain’s worst category B interchange station, for its fabric and environment (RAIL 632).

This resulted in the awarding of a £5 million grant towards refurbishment, from Network Rail’s ‘Better Stations’ fund, only for it to be cancelled by the incoming Coalition Government in 2010.

Fortunately, all was not lost. The previously announced Manchester Hub scheme gathered both pace and funding, morphing into today’s Northern Hub programme (finally agreed in 2012), which is spending £44m to rebuild Victoria (RAIL 721).

In 2010, work to rebuild bay platforms 1 and 2 revealed human remains that are believed to belong to 19th century cholera victims. The station occupies the site of Walkers Croft, a 19th century church and graveyard linked to a Victorian workhouse.

And earlier this year work began on demolishing the skeletal remains of the old Southern roof - it is being replaced by a new £16m structure made from ETFE (ethylene tetrafluoroethylene), a material previously used on the refurbished roof at Manchester Piccadilly.

Other work included in the scheme is:

An improved concourse, including a new fully accessible bridge link to the Manchester Arena to separate Arena visitors from rail passengers.

Restoration of the external canopy and glazed entrances.

Expanding the station not only provides a far better environment for the ten million people who currently use it every year, it also caters for growth - numbers are expected to increase by another two million when the Ordsall Chord opens.

At the moment, the station (unsurprisingly) is a building site. A scaffolding raft was built under the old roof, to facilitate demolition and protect passengers below. The platform level supports and hoardings have led to the closure of some retail outlets, restricting passenger flow at rush hour and leaving the area devoid of natural light.

Northern Rail normally keeps plenty of staff on hand to offer guidance to passengers confused by the changes. But it’s a small price to pay to see the end of a roof that has seen more leaks than Julian Assange!

Rebuilding the station’s facilities and roof will be complete by 2015. But the improvements won’t stop there.

Rail services will be expanded, as the station regains its importance as a trans-Pennine route. By 2018 Victoria will be part of the electrified network, with wires spreading out like spider webs through Stalybridge in the East to Bolton, Liverpool and the West Coast Main Line in the West, and connecting with the existing South Manchester network via a new Ordsall curve.

Once complete, Ordsall will allow TransPennine Express services from Manchester Airport to the North East and Yorkshire to be diverted via Victoria. Other plans include two new fast trains per hour between Manchester Victoria and Liverpool Lime Street. And from May 2014 the reinstated Todmorden curve will allow the introduction of a circular service via Burnley, Blackburn and Bolton.

To facilitate all these extra services the approaches to Victoria will be remodelled, because the existing layout is a bottleneck - many inward services spend significant time sitting outside the station waiting for outbound trains to clear the ladder crossings.

The original Northern Hub plans suggested two new bay platforms on the former approaches at the Western end of the station. This idea has been dropped due to the Stalybridge remodelling, which allows more through trains to use Victoria, easing capacity constraints caused by terminating and turning around services. The end result of all this work will be faster, more frequent services between Manchester, Leeds and Liverpool.

All these developments indicate that Manchester Victoria is finally shaking off its image as Piccadilly’s ugly sister, to regain both its image and its importance as a hub for an area of the city that has regenerated itself, with acres of new residential and commercial properties.

2018 will herald an exciting new era in the station’s history. The old days may have gone, but that’s not always for the worse!