The hard work continues at Dawlish 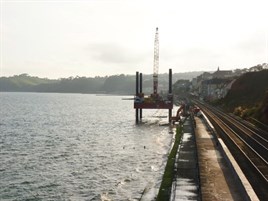 Up until 0200 on April 4, Network Rail was unsure when the line through Dawlish would actually re-open.

That would have been a major stumbling block, as that was the day Prime Minister David Cameron was due to visit the Devon town to officially re-open the line that had been washed away two months earlier.

NR’s new Chief Executive Mark Carne, only a few days into the job, was to accompany Cameron and greet members of NR’s ‘Orange Army’, who had completed the repairs.

But there had been further damage along the exposed sea wall route. The wall itself was repaired sufficiently for trains to pass, but the condition of the cliffs near Teignmouth was now causing complications.

So that morning NR staff, including press officer Julian Burnell, were out walking the line to see if it was passable. Thankfully it was.

The story of what happened at Dawlish is well known (RAIL 742-746, 759). One of the biggest storms to ever hit the South West peninsula struck the resort, causing devastation. The weather had actually turned a few days previously, with a small washout on February 2, but that was not enough to cause major damage. The big storm followed two days later!

Burnell says that the team watching for the weather had never seen such a severe warning. “It was code black, they couldn’t believe it.” (Code black is the highest warning for a storm - NR had never received one before.)

And he recalls the situation that confronted him when he arrived at the scene the following morning. It sums up Dawlish perfectly.

“When I got here it was beautiful. But then I realised I was looking across at the Down platform, and there were waves splashing through. The Down platform had been destroyed by the waves, with most of it on the track.”

Initially, one of the major challenges was to render the area safe. The beach was still open (in fact, NR has never been able to officially close it), which meant that on the following day there were plenty of sightseers visiting the beach, walking up to the damage site to take pictures of the track dangling in mid-air. RAIL published some of them.

“We had problems with people looking at photographs that had been taken, and wanting to take their own,” says Burnell. “Riviera Terrace was not happy with the number of sightseers.”

But NR’s priority was on getting more than just the beach safe, it needed to make the whole area safe.

“We had people on the beach, but we had to get the houses next to the railway safe, too,” says Burnell. “The houses were at risk, and one was actually undercut by the damage. We had to put monitoring systems in straightaway, because the area had to be safe.”

Teignbridge Council, the local authority, quickly employed a security firm to deal with the problem. NR subsequently also employed the company, because of the distinct need for public management.