The changing face of Peterborough 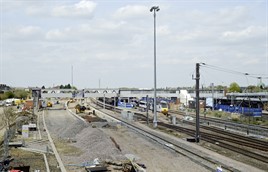 But there’s another important interchange station that is receiving a major facelift. Peterborough may not have as high a profile as Reading or Birmingham, but Network Rail is very much aware of the station’s role as a strategic hub.

The growth in traffic on the East Coast Main Line in recent years means that the station’s existing layout has become a bottleneck. The station is also set for a massive increase in passenger numbers, to cope with a growth in commuting traffic (linked to a growing population) and its future inclusion on the Thameslink network.

All of which necessitates a long-overdue upgrade. Network Rail’s £43m project will mean improved train services, with more trains to different destinations, and shorter journey times. The work will also support the predicted 100% growth in demand for services to London over the next 25 years.

Recent progress at Peterborough has been significant. An enlarged concourse has opened, with new retail units and better information provision, while the ticket office itself has also been refurbished (RAIL 703). That phase also saw improvements to the car park, taxi rank and bus stop outside the station.

But that’s just the start - more changes are on the way that will affect where trains call in future.

“The service pattern will be somewhat recognisable against today’s pattern,” says Network Rail spokesman Chris Denham. “The pattern is against the
new numbering sequence which recognises that the current Platform 1 will be abandoned.”

Capacity demands that there will be no requirement for such a short platform. The existing bay platform will therefore be taken out of use and filled in during December, to enable the extension of the current Platform 2.
“It’s a challenging timescale, as we will have to build 65 metres of new platform in just 20 days,” says Denham.

The existing Platform 2 will then be renumbered as Platform 1. The new Platforms 1 and 2 will host Thameslink trains, the Lincoln turnback operated by East Midlands Trains, and East Coast trains.

“Platform 3, which adjoins the Up Fast, will accommodate East Coast services, where a stopping move can be accommodated without impeding following traffic,” says Denham.

“A proportion of East Coast services that currently stop at Peterborough will use the new Up Fast platform, with concomitant benefits to journey times. However, with the timetable as it is, not of all of them will be able to, as it would delay following services. We anticipate that those unable to use the platform will continue to use the current platforms.”

Platform 4 will be continue to be used for northbound East Coast services, and possibly for Thameslink services that are to be turned and put in Nene sidings (as happens today with First Capital Connect trains). Denham stresses that these are assumptions based on current timetables, and may change.

Work has started to build out the ‘new’ Platform 3 from the side of the existing Platform 3, while construction of two more new platforms (forming a new pair of island platforms to be numbered 6 and 7) is also well underway.

“These platforms will essentially serve local and regional services,” says Denham. In particular, these are services currently operated by Greater Anglia (to and from Ipswich), East Midlands Trains (to Norwich or Liverpool) and CrossCountry (to Stansted Airport or Birmingham New Street).

Separating out those DMU services from the electrified lines is crucial, although Denham says it’s less about splitting local and regional east-west trains from InterCity and Thameslink trains, and more about separating flows and avoiding conflicting moves.

“The reality is that demand at Peterborough station as a destination, and an interchange, is outstripping the capability of the existing platforms. They are too busy, too short and too few,” he says.

“As far as possible, the modified layout meets the needs of the train operators and passengers.

“Platforms 4 and 5 are currently very busy, and the addition of a new island platform with reduced interaction with the ECML Down Slow and Down Fast was seen as the best way of improving performance and reliability for these services.

“Platforms 6 and 7 will become the primary platforms for east-west services through the station, and the approach layouts considerably ease movements of these trains. Consequently Platform 5 is considerably less congested, and can be used for the same purposes as 4, 6 and 7 as required.

“The route through Platform 5 has the benefit of allowing 775-metre freight trains to move across the ECML and the March/Stamford lines in stages, without having an impact on the movement of passenger traffic.”

In addition, the new two-way goods loop will carry freight to and from the March/Stamford lines as required.

Away from the track layout, anyone who has used Peterborough station recently will notice that the recent extension to the footbridge looks out of kilter with the original structure.

“The current pedestrian footbridge will, in future, provide lift access to all platforms,” says Denham. “We are installing four new lifts to enable access for all, to and from all platforms using the existing and new footbridge.
Denham says the ‘skeleton’ of the footbridge was installed in November 2012, to enable new power feeds to be connected to the station during the blockade last Christmas.

“Over the next six months the public will start to see the new lift shafts appearing on every platform, and the windows being fitted,” he says. “These features will blend the new and the old together to give a complete picture.”

The footbridge on the western side of the station has also recently been extended, to provide a walking route available for train crews only.

However, Peterborough City Council has a vision to develop that area (currently occupied by a car dealership, a disused dairy and former railway land), and it’s possible that a proper western entrance will be built.

An extension is also planned to the parcels bridge that once served the now demolished Royal Mail sorting office to the east of the station. The bridge currently features ramped access (to Platforms 2-5) that allows full use of the mobility buggy “due to customer demand”, says Denham. Many passengers travel with suitcases and value the current arrangement.
The entire project is due to be completed in March 2014, in time for the new expanded capability at Peterborough that is planned to be available for use from the first quarter of 2014.

These dates are confirmed in the Network Rail Delivery Plan statement, so in less than a year from now, it looks as if an expanded and improved Peterborough station will be a reality.