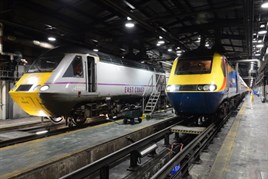 Neville Hill depot is home to unsung heroes - not just the High Speed Train fleet based at the Leeds facility, but also the staff.

Many have been there since before privatisation, working hard at what is perhaps an underrated depot.

When RAIL visited on a freezing December night to observe the nightshift, we were told that the depot’s movements would be reminiscent of Clapham Junction. In actuality that is a fair comparison - the number of train movements is startling.

Neville Hill depot is largely operated by East Midlands Trains, with another area of the site managed by Northern Rail. East Coast and CrossCountry trains are also maintained at the depot - the EC fleet contains High Speed Trains and Class 91/Mk 4 sets, while XC’s fleet is only HSTs. EMT’s Neville Hill configuration also comprises just HSTs (the operator’s Class 222 Meridians are based at Derby Litchurch Lane).

EMT Depot Manager/Fleet Manager Linda Wain is in charge at Neville Hill. A cheerful, determined woman, she welcomes RAIL into her office for a chat before the start of the shift. She’s not working tonight, having worked through the day. My guide will be Technical Manager  Simon Roberts.

“Neville Hill is an older workforce,” she says. “We are getting some retiring, so we are taking on apprentices. There are two young lads now doing apprenticeships, and four new starters.”

However: “There are still no women engineers here, but there are two female shunters.”

All the new arrivals are new to the rail industry, she says. One was delayed in starting his new job because in his previous role, in the rally industry, he had to take part in the Dakar Rally.

Wain is concerned about the future. “Engineering in the UK is in a very poor place,” she says. “We said we’d work with South West Trains Graduate Engineering Intake Programme, and they had no engineering apprentices.

Currently the EMT depot has 199 staff, of which 82 are fitters. The average age of staff is in the 50s.

Wain is implementing change: “I have been here for a year. It struck me that it had slipped back to British Rail days. It was singular in its trade. They choose to do disciplines.”

Currently the staff are split between different units. If they can prove basic engineering, prove basic skills and can follow the rules book, then they are part of Unit 1.

Wain says that these have just been signed off, which means staff will no longer be able to say “I haven’t been assessed” when asked to do tasks.

She admits that this process has not yet started and has taken a while to sort, although team members have bought into it. It will be implemented this year.

“My main thing is that there is too much friction. We have a team of staff. There are teams who don’t work as teams. You cannot say ‘it’s not my job’. If your team is working you should be with the team, not drinking tea.”

Another area that will be improved is the dwell times, with Wain implementing ‘touch time’. She doesn’t want teams standing around. Instead she wants the necessary parts to be ready, with the work carried out in a logical progression.