Out with the old…in with New 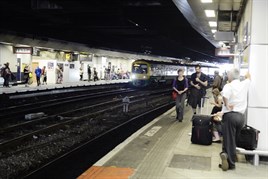 In 2003 it was voted by Country Life readers as the UK’s second biggest eyesore - behind only wind farms.

It’s fair to say that the concrete hulk of Birmingham New Street has never, at least in recent times, featured among the list of Britain’s favourite stations.

But ten years on, things are changing. In 2013, New Street handles about 80% of the daily services to Birmingham, including long-distance trains from London Euston and to the North, services from the South and South West to Scotland, Newcastle, Manchester and Liverpool, and east-west services to East Anglia and to central Wales.

The station has to cope with twice the amount of passengers for which it was designed. And with passenger numbers increasing, in the future it will need to accommodate a quarter of a million passengers every day - nearly double the current number.

That’s an astonishing figure, although it doesn’t take into account the arrival of High Speed 2 from London at its nearby Curzon Street terminus in 2026, which might take the pressure off West Coast Main Line services (and therefore New Street) towards the end of the 2020s.

Despite being substantially rebuilt in the 1960s, New Street was struggling under the strain of increasing passenger numbers, with a station design that must have seemed futuristic and modern in 1967, but which was becoming increasingly out-of-date and ineffective.

The anti-heritage, urban planning zeal of the 1960s had ensured that the previous arched structure was completely swept away. In its place appeared (essentially) a shopping centre, car park and concourse that just happened to have railway platforms underneath it.

The rebuilt station was, in fact, based on a presumption that (in a post-Beeching age) rail travel would continue to decline. Half of the station footprint above the platforms was given over to car parking, leaving passengers with an increasingly cramped concourse area as passenger numbers began to grow again.

In January 2005, approval was given to a feasibility study into the redevelopment of the station, with a regeneration scheme launched the following year. With little architectural merit to preserve (it was, after all, a home-grown creation of British Rail, designed by London Midland Region lead planner Kenneth J Davies), and with changing travelling habits, there was little room for sentimentality when it came to rebuilding the station.

“The heritage all went in the 1960s. The key founding principle is keeping New Street open through the project,” says Network Rail Communications Manager Ben Herbert, who meets RAIL in the confines of an appropriately cramped and not particularly attractive 1960s office block on Smallbrook Queensway (itself Grade 2-listed, built at the same time as the much-maligned New Street just across the road). NR certainly can’t be accused of spending on lavish office facilities in connection with this project.

The £600 million rebuilding project for the station does, in fact, mean a heavy refurbishment, while crucially ensuring the station remains operational at all times. The new concourse will be three and a half times bigger, and much brighter, with a large atrium bringing natural light (at last) into the cavernous platform areas.

Technically, New Street is still regarded as an underground station, with outdated vestibule areas on each platform (a fire safety requirement following the 1987 King’s Cross fire - as such only certain materials can be used on platform surfaces, as per the London Underground). Thus the dark and claustrophobic atmosphere of the platforms adds to the “poor passenger experience”.

However, since the 1980s, fire regulations have moved on, meaning the vestibule areas are no longer required. When the station completely re-opens in 2015, removal of the vestibule areas and the building of the giant atrium above the concourse will make natural light a more prominent feature of the station, filtering down to all 12 refurbished platforms.

Improved access is another key part of the development. “We’re improving accessibility throughout the station with lifts and escalators to every platform,” says Herbert.

On the day of RAIL’s visit these giant machines lay waiting like enormous gifts for the station, one escalator literally still in its packaging, and several new lifts being installed ready for commissioning. There are 15 new lifts in total and 36 new escalators, vastly improving access for able and less able-bodied passengers alike.

“Access has been appalling historically for passengers with poor mobility,” adds Herbert. “The station redevelopment delivers three times the amount of space, better access with lifts and escalators, natural light, and a high-quality station environment, as well as a new public space and stunning architecture.”

Getting to some of these platforms is something of a challenge, requiring a lift to a forbidding bunker-like tunnel beneath the platforms, then another lift up to platform level again – it’s all a bit awkward and confusing, and often provides fare dodgers with a ticket-free route to and from a train. That will all change soon.

The existing building has the remains of a massive NCP car park (built in 1960). The concrete decks are currently being ripped out to transform it into the new concourse, as part of Phase 1 of the project (started in 2010).

In April the other side of the station closes, and the former car park area becomes half of the new station, with the other half following in 2015.

On the day of RAIL’s visit, work was well advanced to create the new ticket hall, as well as new retail units. Eventually, all of the building will be dedicated to the concourse, and in a ‘big bang’ approach the existing entrances will close and switch to those of Phase 1, including what will become an iconic entrance at Stephenson Street.

Even the waiting rooms on the platforms are coming out, says Herbert, although that will cause little distress to regular passengers. “We want people to be spending their time upstairs,” he says.

Above the tracks, redundant ducting for diesel fumes is being removed, and being replaced by ‘impulse fans’. The problem of how to extract fumes from the platform area must have been even more acute in the 1960s, with nearby Stephenson Tower (now demolished) acting as a sort of giant exhaust pipe with a block of flats wrapped around it.

The work is being carried out by construction firm Mace, a Network Rail delivery partner. All materials are being brought in by train, which draws up alongside whichever platform is being worked on at the time.

“The train is swapped twice a week,” says Network Rail Project Sponsor Simon Winfield. On the day of RAIL’s visit, another train is being loaded up at Bordsley, where a new siding has been created on the Snow Hill line for use in the reconstruction project.

While work goes on above the heads of passengers, New Street has continued to operate a full service off 11 platforms, with each platform closed for six to nine months at a time.

New Street is the busiest interchange station in the UK. It is the hub for CrossCountry services, so any significant disruption to staff who work on routes radiating from Birmingham to Scotland, the South and the South West would have a knock-on effect on passengers. XC has up to 500 staff based at New Street - and they’ve been treated to a brand new office building.

With NR mindful of the Heathrow Terminal 5 debacle, operational staff who work at the current station have already begun to take familiarisation tours around Phase 1.

Another challenge has been designing a station that caters for every type of traveller, with Winfield explaining to RAIL that New Street has to be accessible to different types of passengers.

Unlike a lot of other city stations, the relatively good road network means that Birmingham is “car city”, says Herbert, so short-stay and long-stay car parks are being created.

And unlike many other major city stations of the Victorian age, New Street station is also slap bang in the middle of the city centre. While convenient for passengers seeking Birmingham’s retail therapy, leisure attractions and higher education opportunities, the rebuilding of the station in the car-hungry 1960s was not necessarily conducive to easing pedestrian flow in the city centre,

The station redevelopment is primarily a transport project, but NR and its funding partners (particularly Birmingham City Council) are making no secret of the fact that the station will be a part of a new retail space.

A public right of way across the station site, and which has existed since Victorian times, will run through the redeveloped Pallasades shopping centre. This is important not only for the retail opportunities, but also for general ease of access across Birmingham city centre. Pallasades, which has sat above the station since the 1960s, will be relaunched as Grand Central Birmingham.

A recently announced John Lewis store, to be ‘tied in’ to the Pallasades on the south side of the station, will (at 250,000 square feet) be one of the largest John Lewis stores outside London, creating up to 1,000 new jobs. Work on the structure of the building is well underway.

Overall, “the stunning station will add to Birmingham’s reputation for good design and transform New Street into a world class destination”, says Herbert.

All of this will support the extension of the Midland Metro, which will terminate at New Street, providing light rail links to Snow Hill station and Wolverhampton.

By improving transport connections (something that New Street does not exactly have in abundance at present), Herbert says “regeneration will be stimulated in the area”.

In addition, thought has been given to pedestrian links to other nearby stations, with Moor Street a short walk away. Centro (West Midlands Passenger Transport Executive) is looking into options for making access easier, such as a moving walkway or travelator. And the prospect of HS2 in 2026 means that New Street will also have to be well connected to that station.

It all adds up to a rebuilt station with a new retail environment and improved public transport connectivity. The end result will undoubtedly be a very different experience from the dark, unwelcoming and overcrowded station of old.

@TheBassmanUK @YouTube She did.....and, as a vital member of the Wrecking Crew, with drummer Hal Blaine and others,… https://t.co/0LdwW7XB4u