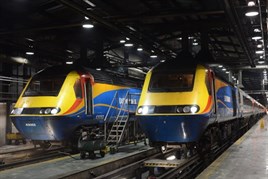 “You gradually see things change. I was operations team leader until four years ago. I was a shunter from 1981-1988, then west end console operator from 1988-1990. I used to deal with the drivers there.”

“The Bank Holidays are bad because the trains are full of rubbish. Every night is a challenge. The state of the trains varies. We are limited to an hour per set.”

His team joins the set at the reception roads. There are five cleaners, one vacuum cleaner and one team leader per set. They board it and clean it. Three teams work per night on Sundays to Fridays, and two on a Saturday.

Says Conlon: “I have five, six, seven people working on the reception roads that deal with the fuelling, the tanking and CET. There are people that deal with reservations, too. It’s pretty hectic.”
What has changed at Neville Hill?

“We are seen as a premier depot again. That’s down to Jon Veitch.”

Patsy Williams is the Senior Supervisor Cleaning. She is sat in an office with Conlon. Behind them is a small Christmas tree. “We like to brighten things up in here,” she laughs.

“I’ve been here 35 years. I’ve always really been into the cleaning. I did work as a TOPS clerk, and I did a bit of time as a timekeeper. I’m in charge of cleaning teams - I let them know what to do, and try and organise them. I have 20 staff on tonight. I will go and check competency if needed.”

Asked what is the weirdest item she has found, Williams says the Quality Inspectors often get there first.

“A prosthetic leg was found… with a shoe. How do you forget that?” She looks puzzled, and then bursts into laughter: “The shoe tells me they were using this. I have seen some things, but that…

“It used to be regular that passengers would come into Neville Hill on the trains. But now that rarely happens.”

We move into the servicing shed. This is where the overnight servicing is carried out. All the electric sets visit here, and it’s mainly used by EC sets - usually the HSTs.

In here is Acting Team Leader Andy Smith. He’s part of Team A (there are five teams that should be identical).

“My job is basically to discuss with the shift manager what’s needed. It’s fluid. I work with EC and EMT, and we get the trains out.”

Tonight he points out that two Traction Motor contactors need work on a power unit.

“That will affect things,” he says. “Unless anything else arises, it will need to go to the main shed. It will go over as a full set. Normally EMT will be in there, so with any luck that will be OK. It’s more of an annoyance than a problem. I was told of this when I started at 2100.”

Smith is another long-term member of staff: “I have been here 22 years. I started as an apprentice, then a fitter, then after 12 years I changed to electrician.”

He was deputy team leader for eight years. “When I was at school I wanted an apprenticeship. There wasn’t many about, but there were two here. We had apprentices that have been and gone. I’m the only one to have been here since I finished it 18 years ago. We didn’t have them for ten years.”

Smith says the challenge changes on a day-to-day basis. “It’s against the clock - on nights there are departure times we must meet. It’s constant juggling.”

Roberts takes us aboard an EMT HST sat on the CET roads. “The QI will have walked through this. All tables are cleaned and prepped. The bins are emptied.”

David Griffiths is one of the cleaners. Tonight he is vacuuming. “I do whatever is needed. I could be cleaning, I could be replenishing. I’ve been here eight or nine years.”

Jean Howley is also one of the cleaners. “I came from airplanes to trains. I thought I would be here for one year, and I have been here 20. I’m on permanent nights. It’s hard to do - I find it better to do shifts. I do four plus overtime, so it’s six at most. Time goes quickly. When I started we did half a carriage, now it is two. There used to be more of us.

“The good things here? The characters are good. There are people from all nations and we work well. We get on. Also, I have my bag of sweets and it keeps me happy.”

Time to go for a train ride. Heather Crow is the depot driver in charge of the HST. Before this job she was a First Class customer host for EMT. She’s been working at Neville Hill for three years. Both her parents work for London Underground, and she volunteers on steam as well. Her ambition is to drive on the main line. She’s even wearing a steam train on her necklace.

“I’ve been on a Black 5 on the West Coast Main Line at 75mph,” she grins excitedly. Tonight, she must guide this HST to a maximum speed of 5mph and 3mph through the washer.

“It has slow speed control. Like cruise control,” she says. “It needs two drivers as we take this into the shunt neck. If it is going into the service shed then only one driver is needed. But we need two tonight as we are going into the main shed.”

Crow has worked the past two nights, and will work the next two as well. Her shift is 2130-0605, although it will be extended to 0705 the following night.

As we slowly enter the wash plant, the HST is hit with water. It’s loud - like a car wash but on a bigger scale. We enter the shunt neck, and then reverse, slowly passing the servicing shed and top-and-tail Direct Rail Services Class 37s on a test train. They are in the stabling sidings adjacent to the main running lines.