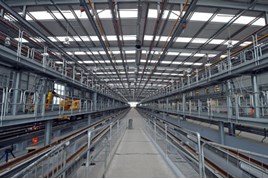 Straddling the Brighton Main Line, the UK’s newest train depot at Three Bridges is almost complete. And when the work is formally finished in July, it will have to wait only a few weeks before the first train arrives.

Three Bridges will play a vital role in the commissioning of brand new Siemens-built trains. The facility is the latest Siemens depot to be constructed in the UK, and follows the likes of Northam and King’s Norton in being developed specifically for new trains - in this case the Class 700s being built for the £6.5 billion Thameslink scheme. The manufacturer says that other trains can be serviced at the facility, although for now that is not the plan.

The first of the ‘700s’ is due to arrive in the UK in August, and will enter traffic in February 2016. Until then, the trains will be housed at the West Sussex facility, which stands on former engineer’s sidings and waste ground.

Today, every couple of minutes a mixture of Govia Thameslink Railway (GTR) and Southern electric multiple units whizz by. In the near future, many of these will be replaced by the ‘700s’.

Two depots are being constructed for the 1,140 vehicles that will operate on GTR from 2018 (the second is at Hornsey in north London). They are almost identical in terms of capabilities, although Hornsey will not have a wheel lathe because the existing facility at the site already has one, and that will be modified to cater for the Class 700s.

The vehicles will form 60 eight-car and 55 12-car fixed-formation electric multiple units. These are being built at Siemens’ manufacturing facility in Krefeld (Germany), with several on test at nearby Wildenrath (RAIL 772). One of the trains (700101, a 12-car EMU) has completed more than 15,000 miles of testing, but will not be the first to be delivered - that honour will go to 700107.

Ruth Humphrey, project director depots, Siemens Rail Systems UK, says of the project: “Everything’s happening this year for us. We had some very critical works that we needed to carry out over Christmas at Hornsey - we managed to complete those. They were mission-critical to the programme. Without them, we would not be in a position to actually open the depot at Hornsey in July.” (By open, she means starting to move teams in, as Hornsey will open fully a year after Three Bridges.)

Speaking at Three Bridges on April 16, she said: “We completed another important phase to allow us to move onto the final phase at Hornsey just a few weeks ago, and we will finally be completing the Down side to the far side of the site here next week.”

“We are still aiming for completion here in July, so we can have an open and operating depot, with the operator actually in place running the operations and with Siemens here in a position to maintain trains.

“The first train shows up in August, and we’ll be out with a camera, no doubt. Then February 2016 is when we’re hoping to run the first services on Thameslink. So the next 12 months is going to be very interesting for all of us.”

Of the Class 700 deliveries, Humphrey says: “Our first unit is due August, and then the final unit is due in June 2018, and should be running out of Hornsey.

“I think what we’re trying to say is that we’re on schedule to get the trains into the UK on the timescales that we’d planned to, so we can get all the units in circuit by 2018, which obviously is essential to be able to deliver the 24 trains per hour through the core of London.”

Humphrey explains why the ‘700s’ are being tested in Germany, and not the UK: “Basically the UK network is really, really busy, and when you’re testing trains you have to try and slot them in. And it can cause quite a lot of disruption.

“We have this amazing facility that’s used not only by ourselves (Siemens), but also by all the other major manufacturers as well, which is in Germany. There all the other trains can be tested, as well as accumulate their full free mileage before they come to wherever they’re going, including the UK.”

Regarding Three Bridges depot, she says: “We have the Horsham lines running around here, and we have five sidings - the Tilgate as we call them. And so you’ve got us, the ROC , Tilgate… we’re a bit of a sandwich.”

These sidings are connected to the Horsham line, and can each accommodate an eight-car train. A five metre-high fence has been erected around them for the benefit of local residents, despite the fact that behind the sidings - next to the Horsham line - is a Balfour Beatty On Track Plant (OTP) site.

There have been a couple of complaints from residents, but that was due to lights being left on accidentally. “Generally, they tend to be happy,” says Humphrey.

Within these five sidings, there is the capability to use Controlled Emission Toilet facilities and ‘tank’ the trains.

Iain Smith, programme director for the Thameslink rolling stock project at Siemens, says: “Last year was about depots and about big stage works in terms of the major construction sites we have at Hornsey and Three Bridges.

“Hornsey is a depot which is very difficult to stage. Like open heart surgery, we have to keep the patient alive while we’re ripping them to pieces and putting them back together again. So we had a series of stages at Hornsey that was very critical to get right.

“Our big project at Christmas this year was a major remodelling in the south end of Hornsey depot. It was one of those lifetime opportunities - a 90-hour possession available last Christmas.”

Sidings have been completed and introduced into traffic, with GTR trains stabled on them. EMUs are also using the new shed built at Hornsey, although in terms of maintenance it is not yet operational.

Says Smith: “The last part of the construction site is now leased to us, and there’s obviously the securing and clearing of that site in the last phase.” He says the main facility building at Hornsey has been completed, with the focus now turning to inside the depot.

He describes Three Bridges a “a different construction site which has been easier to manage in some ways”, adding: “You’ve got the big five-road shed over here - that’s 5x12 cars, and when you stand inside that shed you appreciate how big the trains actually are.

“The administration stores is on that side as well. This footbridge was put in as one of the first things that we did. This is really a depot that can cope with pretty much anything that this train will ever throw at it over its entire life.

“Looking at Hornsey, though, Hornsey has a site of two halves. You have the rebuilding of the stage inside on the existing depot next to the old shed here, and we have the new shed at what’s currently called the Coronation Sidings. We had to do things like build the new Coronation Sidings shed first, but we had to regenerate stabling capacity to move this part of the depot so we could move trains over there and release some more working here. So a very complex series of staging to do.”

Smith says the same facilities are available for north of London as in the south. At both depots there will be carriage washing machines, and then Hornsey, along with Three Bridges, will be fully signalled.

Three Bridges depot has capacity for 172 vehicles on its 11 stabling roads. In the heavy/light maintenance roads there is capacity for one 12-car train in the former and four 12-cars in the latter. The underframe cleaning facility can house a further four 12-car trains. The Controlled Emission Toilet (CET)/cleaning roads can also house 172 vehicles. The wheel lathe features a new tandem head lathe. The carriage wash machines can operate at temperatures as cold as -3°C. The main shed has two bogie drops in tandem configuration.

The site is fully signalled with power-operated points and depot protection. There are also point heaters, meaning that they won’t freeze in cold conditions. The depot is served by 750V DC third rail, but there is also a 25kV overhead line equipment (OLE) test rail within the main shed. Trains cannot move under their own power using that, but can draw power there. This is purely for testing, Humphrey tells RAIL.

Walking around the depot, Humphrey points out various elements of the facility. The stabling sidings on the Up side of the depot are huge - they need to be, to accommodate two 12-car trains. Each ‘700/1’ is 240 metres in length.

At the south end of the Up Sidings is the carriage wash. This is bi-directional and includes the facility to blow water from the trains, which stops the doors from freezing. Every train arriving at the site will pass through here.

There is access to the depot at each end of the site, although there are problems getting from the Down Sidings to the Up Sidings across the Brighton Main Line.

At the wheel lathe, there is a double-headed lathe housed within the single-road shed. It can treat one train at a time. Humphrey explains: “The first autumn will be the issue. If you have congealed leaf that will be the problem, or if the track is not how it should be. There is a crane in case you need to lift.”

She explains that the modification required at the Hornsey facility is a small clamping device to enable the ‘700s’ to be treated there. That facility will be open to other train operating companies, although GTR will have priority.

Inside the 263 metre-long main shed at Three Bridges there are five maintenance roads, plus one in the stores shed.

The latter is used for the bogie drop that enables defective bogies to be removed. There are no lifting jacks because of the two bogie drops, but there is passive provision in place if Siemens decides to install them. Bogie overhauls are not carried out at Three Bridges (it’s about the only work that isn’t!) Instead the bogies are shipped back to Siemens’ facility in Graz (Austria).

The depot is designed for Class 700s, but on the prospect of other trains using them, Humphrey says: “Who knows the future?”

Testing the depot has involved a GTR Class 387/1. This was built by Bombardier, but will not be maintained at the depot.

There is no third rail in the shed, instead a shore supply is used to power the ‘700s’.

Inside the control room, which sits in the administration block attached to the main shed, there is a control panel that shows the entire depot. One controller will operate it.

Humphrey says that access to and from the depot requires a handshake (the driver and shunter need to shake hands before the train can leave). The neighbouring Three Bridges ROC does not control the depot, only the NR routes to the access points.

After many years of infrastructure work, the Thameslink scheme is taking shape as the trains near arrival and their depot opens soon. This is merely the next step in the Thameslink project - it won’t be the last.

Construction of new factory could begin this summer