Coming soon…to a Tube station near you? 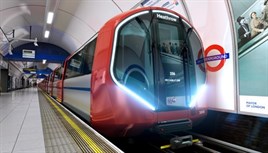 London Underground’s fleet is already changing, but more is to follow. A massive order is in the pipeline for the New Tube for London deal, offering a number of companies the opportunity to build 250 new trains for the Deep Tube.

Of course, Bombardier is throwing its name into the ring in terms of prospective manufacturers. It recognises the challenges it faces, but believes its success with the Victoria Line and S-Stock designs stand it in good stead for the contract, which will be worth between £1 billion and £2.5bn.

The concept has been unveiled by London Mayor Boris Johnson, and trains will enter service in the mid-2020s. No deals have been let, and the Invitation To Tender (ITT) has not yet been issued. But that has not stopped manufacturers such as Bombardier, Alstom and Hitachi discussing the plans, while Siemens has built its own version of a design for what it hopes to offer. The battle is clearly on.

The trains will offer air-cooling systems for the first time on the Deep Tube parts of the network. They will operate on all deep-level lines with the exception of the Victoria Line, where the trains built by Bombardier that entered service from 2009 onwards are in traffic.

LU already operates trains with air-cooling systems - the Sub-Surface Line S-Stock trains that entered traffic from 2010 onwards, and which were built by Bombardier in Derby.

That contract, for which construction will be completed at the end of the year, features 191 trains introduced onto the Metropolitan Line followed by the Circle, Hammersmith & City and District Lines.

A mixture of seven-car and eight-car trains, they are performing at a “staggering level”, according to Bombardier. So much so that reliability levels written into existing contracts have been upped 33% to reflect performance.

Bombardier says: “We are the only supplier of air-conditioned Tube trains. We have over two million engineering hours of recent experience with London Underground and we believe that experience offers a unique benefit for the new deal.”

It is expected that the ITT will be issued this year, with the contract for 250 trains awarded in 2016.

The first line to receive the new trains is expected to be the Piccadilly Line in 2022. The trains on that line date from 1973, and there is a fleet of 86, of which 79 are needed per day.

In the new deal 100 trains will be delivered for the line, increasing capacity by 60% (equivalent to 19,000 passengers per hour). The current fleet was refurbished in 1995-2000, but needs replacing and is now the oldest fleet of trains on the LU network.

TfL has chosen this line first because “the Piccadilly line currently serves 210 million customers a year and demand is expected to grow 20% by 2020. The Piccadilly Line has therefore been prioritised as the first of the four lines to benefit from the new trains and signalling system.”

All will feature air-cooling equipment, step-free access and walkthrough gangways, as per the S-Stock.

Bombardier is under no illusions when it comes to the complex nature of the New Tube for London deal. “We realise that designing these vehicles will be challenging,” it says.

However, it is adamant it can take the success of the Victoria Line and SSL fleets, and build on it. The key challenge, it believes, is to introduce key elements of technology from S-Stock  and other successful fleets into a product the size of the VLU design.

Components cannot just be directly lifted from the S-Stock and added to a VLU train, because of the latter’s restricted loading gauge. Due to its compact size, the VLU design is already ‘packed’, the manufacturer suggests.

So this means looking at it from a different angle and using innovative ideas to come up with a solution. Elements of both will be used, while Bombardier hints at some new ideas as well. Maximising reliability is also vital for the new project.

The deal is for between 2,000 and 2,500 vehicles, with the build rate built into the customer requirements. It will be roughly six years between the contracts being let and the first train entering traffic.