A new lease of life for wartime ‘ghost’ 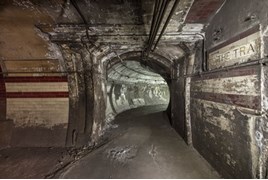 On a quiet residential street near Piccadilly stands an unassuming building. At street level, it is nothing more than an example of the ox-blood red glazed terracotta façade that was common to stations designed by architect Leslie Green.

It looks like any other building in the street… but underground lies an important piece of 1940s history.

Down Street Underground station closed on May 22 1932, having opened just 25 years earlier on what was then the Great Northern, Piccadilly and Brompton Railway (now part of the Piccadilly Line). It had opened later than intended because of difficulties buying the site, and like many disused stations this proved to be the precursor to a difficult few years.

Down Street was never a busy station. Being sited in Mayfair meant that most local residents could afford more expensive means of travel, and Dover Street station and Hyde Park Corner were only 500 metres away in either direction.

Within two years of the station opening, trains began passing by without stopping, and within a decade it was closing on Sundays.

By 1929, its closure was suggested in connection with Piccadilly Line extensions, as not stopping at underused stations would improve journey times for commuters.

Soon after its closure, the station became subsumed into part of the everyday operation of the Tube - it was used for ventilation, and a new siding was put in.

But it was about to become a vital piece of the Underground network. In 1939, it was selected as a bunker for the Government to use in case of bombing raids.

The station became the protected underground headquarters for the Railway Executive Committee - it is believed that Sir Winston Churchill regularly used it with his War Cabinet while the Cabinet War Rooms were being prepared.

Platform faces were bricked up, and the spaces within the station were divided into offices and dormitories. A lift, telephone exchange and bathrooms were also added. It is said that Churchill used to call it ‘The Barn’.

This unique history has drawn much attention over the years. Down Street became the inspiration for the entrance to an underground labyrinth in Neil Gaiman’s novel Neverwhere (also a BBC TV series in 1996), and it has provided the location for scenes in films and even a video game (Shadow Man).

Now Transport for London is looking to write a new chapter in Down Street’s story, by inviting businesses to come forward with proposals for its development. It is part of a plan to generate £3.4 billion in non-fare revenue that can be invested back in the Underground network.

“The combination of space, history and location makes this a unique opportunity. We are looking for a partner with the imagination to see the potential here,” says TfL Director of Commercial Development Graeme Craig.

TfL isn’t letting the whole of the station, because some parts are still needed for running the Tube (it currently provides an emergency exit route and is used by maintenance staff). But that still leaves around 400m2 of development space under some of the most expensive commercial property in London.

Included in the development space is a disused lift shaft, a passenger tunnel and one smaller tunnel. To understand the possibilities, TfL commissioned a feasibility study (conducted by Carmody Groarke) to look at some of the potential options for the available space. Suggestions include:

n At different levels inside the lift shaft: an intimate theatre; a shop for fine jewellery or handbags; an exclusive bar in the heart of Mayfair; and a restaurant.

n In the low level subway: A gallery for modern art; a brand experience or product launch.

TfL says that because of the restricted space available and the need to maximise commercial return, a low footfall/high revenue use would be most successful. TfL says it will consider long or short-term lease agreements depending on the potential benefits offered, and that revenue raised will be reinvested in London transport.

Despite the special nature of the site, it is not currently listed. However, TfL is intending to work closely with English Heritage and Westminster City Council once a shortlist of bidders has been identified, to make sure that any developments are considerate to the heritage of the building.

It’s not clear yet what the site is likely to become, but TfL held an event for interested bidders on May 12 to initiate conversations and start the creative juices flowing.

Before long, the sleeping ‘ghost’ could be transformed into a thriving attraction. And if it works, there is plenty of potential for other disused stations to be developed in similar ways.