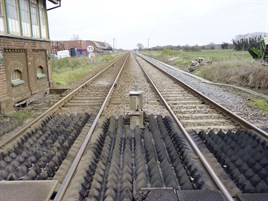 A relatively quiet railway should be a simple place to test new technology. When there are only two passenger trains in each direction per hour - one a stopping train, the other a ‘fast’ - little should go ‘pear-shaped’.

But for users of the Breckland Line, that was not the case when modular signalling was installed in 2012.

The route from Trowse Junction (near Norwich) to Ely North Junction is a two-track railway that features eight stations and eight level crossings with a public highway. The highest maximum speed is 90mph.

It is double-track apart from the final few yards at each end, where it becomes a single-track railway that feeds into a junction. It is not electrified, and over the years it has been rationalised, with branch lines closed and sidings shut.

A loop remains at Brandon and Wymondham, while there are also sidings at Brandon, Eccles Road and Wymondham. None are used. There is also a connection to the heritage Mid-Norfolk Railway at Wymondham.

Until mid-2012 the Breckland Line was controlled by Victorian signalboxes (apart from Thetford’s box, which was built in 1931) and by semaphore signalling. Traditional level crossings and manually operated gates were also still in use, as the railway retained its atmosphere of yesteryear.

The latter has been little short of a phenomenon since it was restarted in 2002, and passenger numbers persuaded GA to increase the formation from two-car to three-car trains. If GA was to introduce a fourth car, that would also be well used. In short, the line is busy for passengers.

Even so, delays shouldn’t really cause too many problems. Except they did after new modular signalling was introduced. The 531/2-mile line suffered… really suffered.

Installed by Signalling Solutions, the lightweight signals were the first of a new generation of signalling infrastructure.

This was late! The system had been commissioned at the end of June that year, but there were delays in ‘going live’ because extra testing was needed. Days before the system was supposed to go live, RAIL was informed of the delay. But when we spoke to crews that worked the route at the time, they were unaware.

The delay meant that signalbox staff who had already been transferred or who had taken voluntary redundancy were required for an additional period. No date, at the time, was given for when the new colour signals would be introduced.

RAIL 704 reported Network Rail spokesman Jon Crampton describing the troubles as: “Teething issues associated with new signalling equipment installed along this line have meant there were some minor delays to some journeys.”

He went on to say: “They were caused by data transmission issues that affected certain signals, and a data change over the Bank Holiday weekend has resolved the problem.”

Crampton said NR would monitor the line. When pressed, he explained that the problem related to the timing of the signals changing colour as trains approached.

But this was merely the tip of the iceberg. The “minor delays”, as NR would describe them, lasted for months.

On the very first morning, the first passenger train along the line - the 0533 Norwich-Cambridge - was cancelled at Ely because it was running so late. EMT also suffered delays that day.

In the first few days there was a Category A SPAD (Signal Passed At Danger), while a RAIL source at the time said drivers were filling in signal irregularity forms with regularity - one train submitted four between Norwich and Ely!

I use this route for commuting purposes, so I was well aware of the reliability problems. Yet for many months, it seemed that NR did not want to talk about it.

Privately I was told of concerns from operators, but these were not placed on record. It since turns out that EMT has been the most vocal complainant of the two train operating companies on the line. This is because of the problems of feeding its late trains onto valued spare paths on the East Coast Main Line, Midland Main Line and through Manchester Piccadilly.

For a year performance remained hit and miss. It settled down after autumn and winter, RAIL noticed, but the performance stats did not back that up (see table). One month they would be acceptable, the next they would not.

Something had to be done, so NR took the initiative and decided to work on the problem itself.

The route comes under the jurisdiction of Marcus Jones, NR Operations Manager for West Anglia. One of his tasks has been to improve performance on the route. He admits it has been a challenge, but believes the situation is improving.

Open and engaging, Jones meets RAIL at Brandon level crossing, which was considered a known trouble spot. Certainly it has attracted plenty of attention in the local press, and last summer the town was the scene of a heated public meeting regarding the performance of the railway. It may be a railway backwater, but feelings run high on this link from Norfolk to the rest of the UK.

Local councillor Ian Horner has been campaigning ferociously for improvements to be made, to alleviate the disruption caused here when the level crossing fails.

And it has failed often. The crossing carries the main road through the town across the railway. At peak time, if the barriers are down, vehicles quickly build up in number. And the problem has been exacerbated because improvement works on the nearby A11 have led to motorists using the road as a diversion.

Jones says the worst performing crossing is not actually Brandon, but Harling Road. But he says he is aware of Horner’s campaign, and understands it.

“For Network Rail, Brandon was the concern for crossing misuse.” He explains this was because users believed they could not be seen, as there was no longer anyone staffing the now-closed signalbox. This proved not to be the case. He adds: “Attleborough and Lakenheath were worse.”

Jones explains to RAIL what happened with the system, and its lengthy, troublesome introduction.

“The first part was meant to have been Ely to Harling Road. That was Stage one and should have been June 2012. Stage two was Harling Road to Wymondham.”

He concedes that the whole project should have been commissioned in one go, but that didn’t happen. Testing carried out in February 2012 showed there was more work to be done, so it was decided to implement the modular signalling in two phases. Fifty signallers worked on the route, after which nine took voluntary redundancy and the rest were relocated. There were no compulsory job losses.

Jones explains: “When it first went live there were continual MCB-OD failures. A workstation was put in at Cambridge power box, but signallers had not experienced using a computer-based signaling system, MCB-OD or axle counters.”

The detection system that had been installed also caused problems, with some unexpected reasons for delays.

It works using Laser imaging detection and ranging (LIDAR) fitted at level crossings. This equipment is set to scan at a range of ground level to 150mm, with a higher reading taken at 700mm. It is the lower scanning that is causing performance problems.

One example Jones gives was six to eight crows were gathered around a KFC Bargain Bucket that had blown onto a crossing. The detection system merely knew that there was a blockage on the line.

On a separate occasion, a twig got stuck and was detected. And out in the Fens, Shippea Hill station is slightly higher than the flat land around it, which means it can get very windy. This wind moves the barriers, and this was also detected (this time by the upper detection system).

Jones says it is the lower detection system that has caused the problems. So last summer, NR turned it off, for which it received a warning from the Office of Rail Regulation (ORR).

“It was turned off because we thought we could mitigate risk. The performance improved.”

The decision to turn it off, he said, lay with the area’s route managing director. It was switched off for around two weeks, after which a recovery plan was formed.

Before that, mechanical shutters for the lower detection screens had been installed. The shutter comes down as the closing sequence at the crossing starts. This begins with the entry barrier and finishes with the exit barrier. Once the barriers are raised, the shutter screen raises.

The performance plan includes additional resources deployed for Shippea Hill and Poplar Farm crossings. (The latter is between Attleborough and Eccles Road.)

Staff are ‘on call’ between 0700 and 1900, and report for duty via the Cambridge Shift Signalling Manager (SSM). In the event of a failure, the SSM informs the additional staff and they rectify the fault if possible. There was an initial period where the number of faults found actually rose, but NR puts this down to fault finding.

In addition, to help with performance, the Anglia Route seconded a project engineer with expertise in MCB-OD operation.

Staff are happier now, and have a lot more confidence in the equipment. NR seems more content with the system, but is not resting on its laurels. Train performance may be getting better, but more work is required.

That’s because the potential remains for problems. On December 18, fixed telecommunications failed near Lakenheath, meaning trains in the peak were cancelled.

But the fact that this incident stood out like a sore thumb in recent months is a sure sign that NR and the Breckland Line are heading in the right direction.