Will rail return to the capital of the Fens? 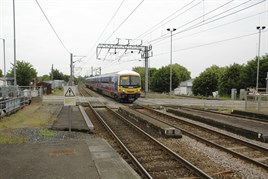 Heavy articulated lorries clatter over the level crossing on the A47 Wisbech bypass, as they make their way to and from East Anglia along one of the main arteries between East Anglia and the Midlands.

This level crossing once carried some of the goods now carried on these lorries, because (until summer 2000) pet food trains departed the Cambridgeshire town bound for Deanside, west of Glasgow.

But this was another casualty when EWS lost several contracts to roads and other competitors. And with the end of this service came the apparent conclusion of 154 years of railways in the town.

The track may still be there, but it is rusty, with nature trying to reclaim the land. Nature seems to be winning the battle (at least near the crossing), and despite the best effort of the Bramley Line Organisation (BLO), formed in 2003 with the aim of returning passenger trains between March and Wisbech.

But in a new report written by the Association of Train Operating Companies (ATOC), Wisbech has been named as one of 20 towns ripe for reconnection to the national network. The town, proclaimed ‘the Capital of the Fens’, has a population of 20,000 (although ATOC claims more than 26,500), yet the closest rail links are at March, King’s Lynn and Watlington. Smaller towns in the area, including Downham Market only 12 miles away, even have direct hourly services to London.

According to the ATOC report, there is a catchment area of 50,000 and that an hourly service would run between Wisbech and Peterborough. This would need to reverse at March, although the bay platform used by trains to Wisbech has closed.

ATOC says the service would connect with the proposed Birmingham-Peterborough train operated by CrossCountry (this currently runs between Birmingham and Leicester). It even talks of the possibility of two stations in Wisbech again, with a new station in the town centre, as well as a possible additional park and ride station adjacent to the A47. Peterborough station is also right in the city centre, offering leisure travellers an attractive town centre to city centre journey.

According to the AA road planner, car journeys between March and Wisbech take 18 minutes. But much of this is on the busy single-carriageway A47, so congestion means it is likely to take longer. In the 1960s that journey by train took about 12 minutes.

ATOC says the indicative capital cost of the route would be £12 million, which would include a new station and the installation of 600 metres of track. The proposed line would use the existing single-track line, although eight level crossings will be required.

Back in the 1960s the closure was something of a surprise, because it had not been recommended in Dr Beeching’s infamous 1963 report. Although East Anglia’s M&GN had closed in 1959, the rest of the lines were expected to remain open. But that was not the case. Coldham station closed in 1966, with the Watlington line going in 1968. The March-Wisbech route lost its passenger services in September 1968, but remained open for freight. This involved steel coil for a metal box factory, as well as parcels, coal and pet food. The line was singled in 1972 with the ‘down’ track lifted.

The closure of the March-King’s Lynn line in September 1968 was blamed in part on the condition of the bridge over the River Ouse just before the junction with the Cambridge-King’s Lynn line at Magdalen Road, although in truth the town of Wisbech was the only population centre of any consequence, and the roads to the town were considered adequate at the time.

No real fight was put up to save them. Wisbech East (the GER station) was quickly bulldozed to make way for first a social centre and more recently housing, but the section to March was retained.

As early as 1974 there were plans to start a passenger service again, with the Wisbech and March Railway Action Committee (WAMRAC) formed with the aim of returning passenger trains to the Fenland town. This was not realised, but WAMRAC and Railfuture operated what turned out to be the last passenger train starting at the town, with a Class 47 hauling ten carriages from Wisbech to Scarborough. The last passenger train to visit the town was Hertfordshire Rail Tour’s ‘The Fenman’ charter on May 12 2001, when EWS 66076 and 66250 top-and-tailed a charter from London King’s Cross that visited several freight only branches in the area, including Wisbech and Middleton Towers.

Beyond the level crossing on the A47 lies the old East Goods Yard, which was purchased from Railtrack in 1995 by Nestle. In 2003 the last remaining sidings were lifted; they have since been replaced by the extension of the car park and factory extension.

Network Rail owns the line from March to Wisbech that is still in situ. New signalling was installed at the junction for the route at Whitemoor Junction during late-2007.

Fenland District Council backed the idea of reinstating the railway but only verbally. It did believe the BLO’s plans would promote tourism and regenerate the town economically, but an application to the council for £20,000 was rejected on the grounds it had ‘no business basis’ and ‘no practical outcome’.