Tunnelling to the future 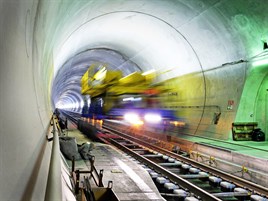 Thousands of feet under the Swiss Alps, a new high-speed, high-capacity railway is taking shape. At its heart is the world’s longest railway tunnel - the 57km Gotthard basis tunnel.

Everything about this project is on a grand scale; at their deepest point, the twin tunnels are 2,300 metres below the high Alpine peaks. At the height of tunnelling work, more than 2,500 people were employed on the project, removing more than 28 million tonnes of Alpine granite and gneiss.

Unlike the existing mountain route, which tops out at 1,150 metres, the new line’s highest point is only 550m and it shortens the distance by rail between Erstfeld and Bodio by 40km.

Gentler gradients will allow 2,000t trains to run unassisted through Switzerland and increase capacity from the current 140-180 trains per day via the mountain route to 220-260 daily. AlpTransit, a Swiss project to develop faster north-south rail links across the Swiss Alps, expects this to more than double annual transport capacity from 20 million to around 50m tonnes on this route.

When the project is complete in 2019, journey times between Zurich and Milan will be cut from the current four hours to just two and a half hours.

But the major beneficiaries will be freight companies who will gain much greater line capacity, lower traction and maintenance costs and shorter journey times on this key trans-European axis.

All this is being undertaken in one of Europe’s most beautiful and sensitive regions, and in a country with some of the world’s strictest environmental rules.

With environmental protection high on the list of objections for those opposed to Britain’s High Speed 2 project; what lessons can we learn from the Swiss on safeguarding Mother Nature and, just as importantly, the quality of life of residents affected by major new railway projects?

Funding for the £8.84bn project comes from a variety of sources; including taxes on petroleum products, and on heavy goods vehicles.

Switzerland lies on the most direct route between the huge North Sea ports of Rotterdam, Hamburg and Antwerp, Germany’s Ruhr region and the industrial powerhouses of northern Italy.

Until the recent economic downturn, freight traffic was growing rapidly both on road and rail. However, that growth is expected to resume as Europe’s economy recovers over the next few years. Intermodal traffic has grown especially quickly, with various open access railfreight operators winning new traffic as well as the incumbent state railway companies.

To protect its sensitive Alpine regions from increasing road traffic, and the even greater traffic expected in the future, the federation is working to transfer freight from road to rail wherever possible.

First proposed as far back as 1947, a new flat route through the Alps was supported by a national referendum in 1992 and test drilling started a year later. Significantly, more than 64% of Swiss voters were in favour of the new Gotthard and Loetschberg basis tunnels.

The original Gotthard Tunnel railway, completed in 1882, famously employs a series of spirals to gain height, as well as fearsome gradients that limit train weights and line capacity, and require trains to be banked and double-headed. Above Erstfeld, where the new line diverges, the classic route rears up like a startled horse, clinging to a shelf cut into the mountainside and negotiating countless tunnels and bridges. A ruling gradient of 1-in-37 is required over the next 18 miles to reach the Gotthard Tunnel entrance at Goeschenen. It’s an unforgettable experience for the rail enthusiast, but for the railway it can be an operational nightmare.

In an era of ‘just in time’ logistics, reliability has also become increasingly important for freight operators. Two major landslips have occurred on the Gotthard north ramp in recent months, closing the line and disrupting international traffic for several weeks. The new tunnel route avoids the most vulnerable sections, increasing the reliability of rail traffic.

Expansion of railfreight capacity is seen as essential to protecting the sensitive Alpine environment of the region. Heavy road traffic on the Gotthard motorway - which shares the same valleys - has a detrimental impact on the air quality and noise levels of the area. Switzerland is keen to see as much traffic as possible switch to ‘rolling motorway’ trains carrying complete lorries between the German and Italian borders. These trains already operate successfully between Freiburg in south west Germany and Novara in Italy via the Loetschberg basis tunnel which opened in 2007 and look set to expand significantly from 2019.

For less than the price of the West Coast Route Modernisation project, two 57.1km long single bore tunnels have been drilled and blasted out of the Alpine granite between Erstfeld, close to the eastern end of Lake Lucerne, and Bodio in the Italian-speaking canton of Ticino.

Further south, a second 15.4km tunnel is also being constructed between Bellinzona and Lugano to eliminate the steep climb to the Monte Ceneri tunnel.

More than 2,500 people were employed on the Gotthard tunnel project at its height, although this has now dropped to around 1,500 as the installation of railway infrastructure, communications and safety equipment takes over.

This SFR1.7bn contract has been awarded to a consortium including Balfour Beatty Rail and Thales and will employ up 700 specialists in signalling, overhead line equipment, tracklaying and safety systems.

With cross passages every 325m, access tunnels and shafts the total length of the tunnel system is more than 152km.

More than 400km of rails manufactured in Austria are being delivered on a ‘just in time’ basis direct to the tunnel. They are laid in 2,000m lengths before being attached to sleeper blocks, aligned to extremely fine tolerances and concreted into place.

Two crossover tunnels - known as multi-function stations - have been built at Sedrun and Faido. They will allow trains to cross between tunnels while maintenance is taking place or in case of emergencies.

Excavation on this scale generates extraordinary quantities of rock and spoil; the rock from the Gotthard tunnels alone would fill a train of wagons stretching from Zurich to Chicago - a distance of 7,160km! A further eight million tonnes is being excavated from the 16km long Ceneri tunnels.

Thanks to advances in production processes, it has been possible to re-use much of the fine-grained rock spoil generated by the TBMs as concrete aggregates for the tunnel lining sections. This is processed on site - eliminating the need for road or rail transport to distant landfill sites. In this way, NEAT has been able to satisfy almost all of its concrete and aggregates requirements from local sources. Any spoil that could not be re-used was taken by rail and boat to create new shallow water nature reserves in nearby Lake Uri.

Switzerland has some of the toughest environmental protection laws in the world and the NEAT project is obliged to meet rigorous standards to reduce its impact on the environment, both during construction and once the tunnels are open.

Air pollution is kept to a minimum by a range of methods, including spraying gravel tips, landfill sites and roads with water to reduce dust, ensuring that most materials are transported by rail, barge or conveyor belt and equipping all contractors’ vehicles with particle filters to reduce harmful emissions. Air quality is constantly monitored to ensure it meets the standards agreed with residents and local authorities.

All waste water from the construction site is purified and cooled before being fed back into local rivers. Where animal and plant habitats are affected, they are being replaced and repaired as worksites close.

This is already taking place at the Amsteg site, where gravel and concrete plants have been removed and pastureland will shortly be restored. The original topsoil is stored off-site and will be returned as quickly as possible once work is complete.

Where changes are permanent, NEAT is obliged to compensate by creating new habitats, plant new trees to replace those lost, re-route and re-nature streams and introduce anti-noise and vibration measures where necessary.

Even the project’s most ardent supporter would have to admit that the extensive construction sites at each end do little to enhance their surroundings. On a damp winter morning, the acres of grey gravel and bare concrete are a stark contrast to the lush green pastures further down the valley.

However, a team of architects has been employed to ensure that permanent structures such as the tunnel portals blend into their surroundings and reduce the visual impact of the new railway. In their current state, it’s difficult to imagine that such bold concrete structures will simply blend into the landscape, but that will be one of the final jobs for the AlpTransit team once the tunnel is complete. The approaches and tunnel portals should certainly be more discreet than the adjacent Gotthard motorway in due course.

The extensive linear worksites at Erstfeld/Altdorf and Bodio, plus the smaller intermediate sites at Amsteg, Sedrun and Faido will eventually disappear. The many structures such as cement silos and maintenance sheds are either re-usable or fully recyclable and will be removed once they are no longer required.

Dust and noise pollution is inevitable with such a major construction project and so local residents were extensively consulted prior to work starting - and they continue to be involved as project develops. Restricted operating times have been agreed and where possible, temporary stores of soil are piled into noise mitigation embankments. Of the CHF19.1bn allotted to NEAT by the Swiss Federation in 2008, 7% is specifically intended for noise mitigation measures such as sound barriers and the diversion of railways into cuttings and tunnels.

Ongoing consultation with residents, and the swift resolution of problems as they arise, is seen as essential to maintaining public support for the project. Such involvement with local stakeholders will be vital if HS2 is to be delivered smoothly. NEAT has the added advantage of public legitimacy thanks to the 1992 referendum that approved it.

Although much of the detail has yet to be finalised, and is still being challenged by opponents of the British project, many of the same measures will be employed on HS2 when construction starts.

After consultation with communities along the proposed route, more than half of the 87-mile HS2 is expected to be in tunnels or cuttings to reduce the noise and visual impact of the new railway.

Much of the tunnelling on HS2 outside London will be undertaken by the ‘cut and cover’ method, which should see the landscape above restored relatively quickly.

However, the Department for Transport (DfT) expects around three million cubic metres of material to be excavated. Clearly, this will require careful handling to reduce its impact on the roads around communities along the route.

DfT reports suggest that as much as possible will be re-used to create embankments and noise mitigation barriers, following the example of AlpTransit.

HS2 Ltd and the DfT are also considering protection of the Chilterns Area of Outstanding Natural Beauty (AONB). Although it is inevitable that any large new infrastructure project will leave some lasting impact, DfT reports that “significant efforts” have been made to limit the effects by designing the route to follow existing contours of the land, and by specifying the use of natural screening such as trees and hedgerows.

At least two million new trees will be planted along the new railway. Of the 13 miles of planned route within the AONB, less than two will be at or above surface level.

Although the UK government has only recently concluded that there’s no credible alternative to an all-new high-speed railway between London and the north, Switzerland should soon start to see the benefits of long-term planning in reducing the endless stream of international road traffic over the Alps.

Thanks to Maurus Huwyler of AlpTransit, the Swiss Tourist Office in London and the Luzern Tourism Office for their hospitality and assistance in compiling this feature.