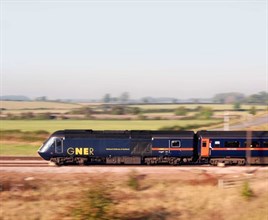 This month Eurostar trains will operate to their full potential on the British side of the Channel Tunnel, running at 186mph through to London St Pancras over High Speed 1.

Capacity will be freed up on the network through bottlenecks such as Herne Hill, for additional services and to put some much-needed resilience into the timetable in the South East. Eurostar services will be quicker, of course, and also much more reliable. By the end of 2009, Southeastern’s domestic high-speed services will also be making use of the new high-speed line, extending the benefits to the commuters of Kent.

The investment in HS1 has already spurred regeneration at Ashford, Ebbsfleet, Stratford and King’s Cross. Taken together with the wide set of transport benefits (which extend much more broadly than just international travellers), the case for high-speed rail investment will be palpable. Yet government, for now, seems to be unmoved. We need to understand why, especially as the rail industry (as recorded at the annual RAIL conferences) has rapidly moved to a position of positive support.

First, why do we need further high-speed lines in the UK?  The argument on which there is least dispute is that new lines will be needed at some stage to provide more capacity on the railway. This summer’s rail White Paper sets out forecasts that show passenger demand increasing by 73% by 2030. There is a graphical illustration of the severe capacity pressures on inter-city services that will result if no action is taken. The analysis confirms that “peak-period crowding would become acute” on the approaches into London from Bedford, Birmingham, Reading and York, as well as from Leeds to both Birmingham and Manchester - that is, on significant sections of all the main inter-city routes. And these demand forecasts don’t even take into account any impacts from potential road pricing or aviation taxation schemes.

The White Paper puts forward some proposals - including the introduction of new Intercity Express trains, Reading station upgrade and so on - which it states will provide enough capacity for the next 20 years. Welcome though these investments will be, they inevitably entail disruption to the existing network (for instance, to accommodate longer trains). There is no costed programme to expand capacity on the East Coast Main Line, and it is clear that once the existing scheme at Milton Keynes is complete, the southern section of the West Coast Main Line will rapidly revert to ‘full: no vacancies’ as far as additional train paths are concerned.

Whether these interim measures can sensibly be stretched out to 20 years is questionable. What is known is that it has taken the best part of 20 years to bring HS1 to fruition. So there is simply no logic for the delay that the White Paper calls for before implementing any new North-South line(s).

The green case for speed

But does this additional rail capacity need to be provided by high-speed passenger lines? The White Paper looks at alternatives to high-speed rail. It concludes that MAGLEV is too costly, risky and inflexible and that a new freight-only line would not solve the peak-period passenger demand problem. Adding new tracks to existing lines is also rejected because of the cost and difficulties of working alongside a functioning railway.

Helpfully, then, the White Paper concludes that a new line will ultimately be the best option. There is no need any more for debate, as far as government is concerned, on these other options which always seem to get an airing whenever ‘conventional’ high-speed rail is discussed.

However, strangely, it concludes that perhaps conventional rail would be better than high-speed for the new line capacity, in large part because of the environmental impacts of operating trains at higher speeds.

Of course, high-speed rail, just like any other transport initiative, needs to stand up to scrutiny on its environmental performance, given the imperative to combat the threat of climate change. Greengauge 21 has identified the environmental gain from high-speed rail from the outset. But it seems that a flawed analysis underpinning the White Paper of carbon emissions from different forms of transport has resulted in an over-cautious position on high-speed rail.

The key evidence that is used to support the White Paper contention that speeds no higher than today’s (125mph) might be the best way forward is an analysis of average carbon emissions per passenger on the London-Edinburgh/Glasgow route. The crucial assumption underlying this calculation is load factor: how many passengers are assumed to be on each form of transport. For domestic air services, the assumption is 65% load factor overall in this corridor. For existing (125mph) inter-city services, where demand tails off over the northern section of the route, load factors are lower, and 45% is the assumption.

But then comes the shocker. High-speed trains, it is assumed, will only be 33% full! This compares with the 65% load factor achieved by Eurostar. The resulting carbon emissions per high-speed rail passenger are therefore found to be twice the level they would be in practice. In the real world, the increased capacity and higher loadings on high-speed services would offset the energy effects of higher speed so that carbon emissions per passenger for high-speed rail would be comparable with those from 125mph rail services.

And, of course, high-speed rail services have a considerable advantage over flying. With the right network links in place, particularly to Heathrow Airport as well as central London, a high-speed railway could carry many people who currently take flights within the UK, relieving capacity pressures at airports and resulting in significant carbon savings. Without operating at high speed, rail cannot offer the critical three-hour journey time between London and Scotland that would compete seriously with the airlines and create a substantial mode switch, reducing carbon emissions from domestic air services and freeing up much-needed runway capacity at Heathrow. Rail would also be able to benefit from any future shifts in the UK’s electricity mix towards renewable sources of energy, which of course aviation cannot take advantage of.

One of the findings of a major feasibility study of high-speed rail, by Atkins in 2002 for the Strategic Rail Authority (available since 2004 on the Department for Transport website), reinforces the case for high-speed rail. The study demonstrated that providing 186mph services is a crucial element of the business case because conventional speed railways (operating up to125mph) will not be attractive enough to future passengers, will not generate sufficient revenues and will therefore have a worse cost-benefit ratio than high-speed rail, even if some marginal savings can be made in construction costs.

The environmental case for high-speed rail is strong and has even been given a value of between £2bn and £5bn in the Eddington Transport Study, published at the end of last year. It has not been misled on the question of load factors in the way that the White Paper has been.

Of course, these carbon benefits alone will never justify the expense of further high-speed lines in Britain. But they cannot be ignored, and if measured properly will show that the example set by Eurostar can be replicated in a wider British high-speed network.

In the White Paper, you will find no government commitment to building any new lines, high speed or otherwise. The document did put a priority on the London-Birmingham-Manchester corridor, which concurs with the Greengauge 21 proposition for ‘High Speed 2’ (RAIL 569). And ministers have since gone on record to say that they have not ruled out high-speed rail.

About now, we are due the DfT’s response to the Eddington study. So it is also instructive to go back to what government adviser Sir Rod Eddington said, both at the time, and in subsequent cross-examination by the House of Commons Transport Committee.

In December 2006, the Eddington study was widely reported as having poured cold water on high-speed rail. It argued against ‘grands projets’ and seemed to favour smaller-scale investments. However, when questioned by the Transport Select Committee in April 2007, Sir Rod clarified that it was not conventional high-speed rail technology that he had rejected at all, but MAGLEV-type solutions. In fact, he went further in stating that the planning for a high-speed railway should focus on the London-Birmingham-Manchester corridor and should start now.

Benefits must be shared

One vital issue to address in considering the prospects for high-speed rail is that of practicality - how achievable is it to develop another high-speed railway in Britain, on a relatively crowded island with many other calls on funding and resources? It can probably be taken as a given that the engineering side of designing, constructing and operating a high-speed railway, while challenging, can be solved. The technology is proven and there is now experience in Britain, not to mention that from overseas. The key challenges are more likely to be on the planning side, where many major projects (including HS1) have faced difficulties and delays in the past.

One lesson from other projects, particularly those of a national scale, is to ensure the benefits of a high-speed network are widespread, not just focused on a limited market - say, of time-sensitive business travellers. Price-sensitive leisure travellers need to be attracted to high-speed rail and it needs to be genuinely accessible to all. Thinking geographically, new rail infrastructure can be used to offer a wider range of journey opportunities across the country. Greengauge 21’s HS2 proposal, for example, while focused on the London-Birmingham-Manchester corridor, includes the scope to provide improved services from Kent to Heathrow and from Southampton to Birmingham and the North West. And capacity on conventional lines could be freed for new local passenger or freight services.

Ensuring there is a coherent long-term strategy for high-speed rail is important in order to give confidence in long-term land use and economic planning and to avoid wasting resources. The UK has done such a thing before: in the 1950s a far-sighted vision was set out for the nation’s motorway network. A long-term high-speed rail strategy could include not only HS2, but also HS3, serving cities such as Leeds and Newcastle on the eastern side of the country, and perhaps even HS4. Importantly, this would also allow the rail industry to avoid unnecessary spend on upgrading the existing network.

While on the subject of planning, integration into the local environment is also important. Experience in France has shown that high-speed rail can be very effective at stimulating local economic development and regeneration - but only if it is closely linked to local transport networks (providing feeder services for passengers) and if it is part of wider city development plans. Local and regional planners are often better than civil servants in recognising that high-speed lines are not just transport projects, but tools of economic policy.

And finally, the question of how to design and build a new railway line that has as benign an impact as possible? London & Continental Railway’s experience from HS1 suggests that building new railway line alongside existing transport corridors, wherever possible, minimises the environmental impact, has fewer effects on local residents and businesses, but at the same time facilitates connections to the current railway network.

The support for high-speed rail is becoming widespread across the rail industry and its prospects look good. It’s difficult not to agree with Sir Rod Eddington that the time to start planning is now.