Strictly for the birds! 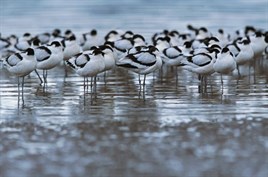 Dig a big hole, and the dirt you unearth has to go somewhere. The bigger the hole, the more difficult it is to find a location suitable to dispose of the waste material. And on a construction project the size of Crossrail - with 42 kilometres (26 miles) of tunnels being dug - that waste material amounts to six million tonnes.

Actually, waste is perhaps not the right word for a major by-product of the Crossrail tunnelling. Around 4.5 million tonnes of spoil is being put to good use at Wallasea Island (off the coast of Essex), where it is helping to create a new 1,500-acre RSPB nature reserve (see panel), while the rest is being used for land restoration.

However, you can’t just dig soil up from a tunnel and deposit it somewhere else, irrespective of whether or not your intention is for life to exist on it. It must be chemically characterised for typical ‘brownfield’ contaminants, and for those derived from the injection of grout and polymers used during the tunnelling process. Injection of polymers is necessary to condition the ground, allowing a tunnel boring machine (TBM) to tunnel at a rate of 8-10cm per minute.

Because of that, wherever the intended spoil is being deposited, it is essential that it is free from contamination. All material must meet the relevant chemical criteria stipulated by the intended site’s environmental permit. It must also comply with the Water Framework Directive, which monitors, measures and sets benchmarks for the ecological and chemical status of ground and surface waters.

The potential risk to the aquatic environment was a big concern for Crossrail. Aside from any moral obligation, if it was assessed that the polymers might cause harm, the outcomes could have significant financial implications for the project. In that instance, the options would either be to:

Change the polymer, which would delay the start of a TBM (costing in the region of £250,000 per day).

Design a bund and cell within the facility to accept the material, which would cost tens of thousands of pounds and require a major change to the facilities permit (again causing TBM delays).

Prevent the tunnelled waste from being deposited in an area in close proximity to controlled waters, resulting in logistical issues. This outcome would have the highest cost implications, potentially running into millions of pounds, as well as further delays.

Determining if there are ‘eco-toxic’ risks to the spoil is the domain of ESG (a provider of testing, inspection and compliance services). Its Environmental Chemistry team worked with Crossrail and its contractor Atkins to analyse numerous samples collected from project sites.

A number of barriers make this a more complex task - for example, the Intellectual Property rights of the polymer manufacturers means that ESG could not be party to the chemical make-up of the polymers used. It’s a bit like trying to work out how to make a cake without the list of ingredients.

To get round this problem, ESG created a methodology for analysis using a careful evaluation of polymer chemistry.

Jonathan Evans, principal consultant at Atkins, says: “This is a project made more complex by the secrecy which has to surround the polymers we use to prepare the soil for drilling. Yet the expertise of the Environmental Chemistry team at ESG has enabled an alternative method of polymer detection.”

From that, the team was able to determine the concentrations of polymer within the excavated soil following biodegradation, and its potential for leaching into the surrounding environment.

In the example of the Wallasea nature reserve, checking for contaminants that could cause problems for the eco-system (such as toxicity, carcinogenicity, polluting the water or stunting the plant growth) was vital. ESG tested the soil for asbestos, cyanide, aromatic hydrocarbons, arsenic and cadmium, so that only safe soil could be deposited at the Wallasea site.

The same tests are routinely carried out for the tunnel spoil at the Western, Eastern, Thames Tunnels, Bond Street, Paddington and Docklands Transfer station sites.

Safe soil is then transferred by various
routes (depending on the site it is coming from) to Northfleet, from where it continues its journey by ship to a special Crossrail jetty at Wallasea Island.

At the height of tunnelling, five freight trains a day were carrying spoil to Northfleet. In total, more than 2,000 shiploads will have been deposited at the nature reserve.

A mutually beneficial use of an otherwise waste material is paying dividends for the natural environment. At Wallasea, the RSPB still needs around eight million tonnes of clean soil if it is to complete the scheme by 2025.

The ideal solution is from a small number of large infrastructure projects…something the rail industry will not be short of in the coming years.