Full steam ahead for Crossrail 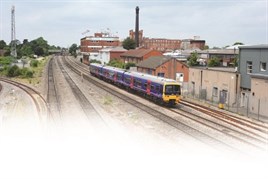 Underground railway lines running East-West across London was a concept first envisaged as far back as the 1840s, when Brunel was planning the city railway.

150 years on, in 1989, the Central London Rail Study proposed an East-West ‘cross rail’ (Crossrail 1), as well as a London Underground line connecting Wimbledon and Hackney (Crossrail 2) and an extension to the existing Jubilee line.

Parliament rejected these proposals, but the Government later commissioned further investigation into how to effectively increase capacity to meet projected demand.

In 1999 the Shadow Strategic Rail Authority (SSRA), in collaboration with Transport for London, Railtrack and London Underground, carried out a new study into developing the East-West axis across London.

The resulting report suggested that refinements to the existing infrastructure would not be sufficient to ease congestion problems and cater to the ever-expanding requirements of mass transportation across London. It concluded that a new cross rail development would re-define London transport, effectively easing congestion, stimulating urban regeneration and resolving network capacity issues. The then Labour government implemented a 10-year target to increase rail travel by 50%, but it soon became clear that the existing tired infrastructure would not be capable of delivering growth on that scale.

Crossrail Ltd (CRL) was finally established in 2001 under the name Cross London Rail Links (CLRL). CLRL was awarded £154 million to research the potential for developing cross-London links, to bring London’s transport network up to date and provide for the projected future capacity. Crossrail aims to “promote and develop vital links to meet the needs of people and businesses… and to ensure that London continues its role as Europe’s leading financial and business centre.”

The project gained Parliamentary approval in July 2008, with the passing of the Crossrail Act, and the status of Crossrail Ltd altered from a planning and promotional organisation to a delivery agent for the project.

Crossrail will run 118km from Maidenhead and Heathrow in the west, via new twin-bore tunnels beneath central London, to Shenfield and Abbey Wood in the east, bringing 1.5 million people within 45 minutes of London’s key business districts.

Economic forecasts suggest that the project will add £42 billion (previous estimate £36bn) to the UK economy, thereby boosting Treasury coffers with £17bn in tax. In addition, about 14,000 people will be employed across the project during the peak construction period in 2013-2015, with a further 7,000 indirect jobs created.

Crossrail was initially a joint venture between Transport for London (TfL) and the Department for Transport (DfT). It became a wholly owned subsidiary of TfL in late 2008, but remains jointly sponsored by the DfT
and TfL.

Heralding a major milestone, Crossrail announced on December 10 2010 that major tunnelling contracts to the value of £1.25bn had been awarded, with a saving of £1bn made because of the highly competitive nature of the bidding process. The contracts are on a scale not matched since the Jubilee Line extension beneath the Thames to Canary Wharf and
the HS1 rail link from St Pancras to the Channel Tunnel.

It is hoped that UK construction and employment opportunities will receive a major boost due to the labour-intensive nature of the works, despite the biggest and most imminent contract (five-mile stretch from Farringdon to Blackwall, worth £500m) going to Spanish construction company Dragados,  working with the UK arm of Irish construction
group Sisk.

The newly-awarded contracts will deliver 18km of the required total of 21km of twin-bore tunnels. Preparation work is scheduled to begin in late 2011, with the first tunnel boring machine (TBM) due to begin tunnelling in spring 2012, tunnelling nine miles from Royal Oak, west of Paddington, to Blackwall.

Seven 120 metre-long TBMs, which have a diameter of 7m, will be used to construct the tunnels, which will measure 6m in diameter once the concrete tunnel segments are in place.

TBMs will begin boring eastbound beneath London from Royal Oak, and westbound from Victoria Dock, with tunnel portals located at Royal Oak, Pudding Mill Lane and Royal Dock. The construction of the first portal, at Royal Oak close to the A40 flyover, began in January 2010 and is due to be completed in late 2013. Preparation for the portal at Pudding Mill is also now under way.

The TBMs will be purchased by the various contractors from European companies, as there are currently no UK TBM manufacturers. Two will be used at Royal Oak, and four at Royal Docks, while the final TBM will be delivered to the Plumstead site.

Due to the potential for soil settlement during tunnel construction, the TBMs will be required to run 24 hours a day, 365 days a year, with teams of about 20 workers for each machine. Crossrail plans to host a TBM tracking page on its website, to enable visitors to visualise the progress of the tunnelling project until its completion (expected to be late 2014).

On December 1 Crossrail announced that the procurement process for the purchase of 60 new trains had begun (RAIL 659), with contracts likely to be finalised in late 2013. The new fleet will deliver Crossrail services to 37 stations along the route, and is expected to boost London’s rail capacity by 10%.

The contract, estimated to be worth £1bn, will cover the combined procurement of rolling stock and maintenance depots. It will also comprise the entire development process, including the design, manufacture, testing, commissioning and introduction of a fleet of electric trains that will connect commuters to the City, Canary Wharf, the West End and Heathrow Airport.

“The procurement of rolling stock will bring the Crossrail project to life for many Londoners and is a significant step forward,” said TfL Chief Operating Officer Howard Smith.

The new Crossrail trains will be about 200m long, and are planned to feature more modern interiors and improved functionality for all passengers, such as wider interconnecting gangways between carriages and seating arrangements that cater to the needs of both long- and short-distance commuters as well as the leisure traveller. Particular attention has been paid to the needs of passengers with restricted mobility, with level boarding at central stations and no stair-access stations, to bring services into line with the Disability Discrimination Act of 1995.

The delivery of Crossrail is set to play an important role in the future of the construction industry, with work beginning in November on a new Tunnelling and Underground Construction Academy near Ilford. The Department of Business Innovation and Skills has provided £5m of funding for the academy, which aims to address the problematic shortage of workers with the necessary skills to carry out work on Crossrail and similar projects, such as the Thames Tideway, Dublin Metro and National Grid plans to install new electricity cable tunnels beneath London.

The academy will be the first purpose-built training facility of its kind in the UK, and will begin to offer courses in spring 2011. Crossrail also plans to deliver at least 400 apprenticeships over the life of the project.

The project has been the subject of scrutiny and criticism from other parts of the UK, particularly at a time when decisions regarding improvements, such as Network Rail’s planned electrification of the main line from London to Swansea, have been deferred. The DfT has yet to decide whether to replace trains on the London to Swansea line with electric diesel multiple units or electric multiple units - the latter would mean faster journey times to and from the capital, as well as greater energy efficiency.

Farringdon station will be located at an intersection of the new east-west and north-south rail axis, effectively providing a continuous route across London from Inverness to Brighton and Penzance to Dover. It will also link to four of London’s five airports - Heathrow, Luton, City and Gatwick - effectively bringing the capital and international travel within easier reach of millions.