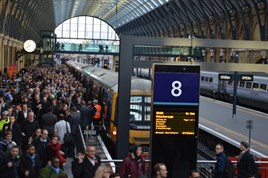 The tunnel boring machines continue to churn their way through subterranean London on the £14.8 billion Crossrail project, but already Transport for London is thinking about the big infrastructure projects of the future.

It is designed to address capacity constraints that will become ever more critical in the future, with new connections across the capital supporting the UK’s single largest area of employment. New opportunities could be provided for thousands of new jobs. And the relatively forgotten areas of outer London and the Upper Lea Valley would not be left behind - Crossrail 2 could help support up to 200,000 sustainable new homes.

From a railway perspective, something has to be done about the increasingly congested Waterloo. A ten-car railway is being created with more carriages on suburban lines out to the suburbs, but platforms can only be extended so far, even if the concept of double-deck trains is now being talked about again for the South West Main Line.

The potential additional capacity of Crossrail 2 could move up to 90,000 people in the morning peak, relieving the bottleneck at Waterloo and at other parts of the rail network around London (including some of the suburban services in and out of King’s Cross) by diverting services into a new tunnel under London.

“It’s bigger than Crossrail 1,” says TfL Managing Director Crossrail 2 Michèle Dix, explaining the vision for the scheme. “We are planning for a continued concentration of jobs in the Central Activities Zone, but spread over a larger area.”

While the pattern of commuting into the capital is set to continue, it will do so on a grander scale. Says Dix: “The London employment model is dependent on a dense rail network which focuses on central London. Investments under way will deal with today’s growth, but will not address the challenges of 2030 and beyond.”

Large schemes to deal with these pressures are nothing new, of course, but they have not been a constant feature of London’s transport infrastructure development. After the Victoria Line fully opened in 1971, it wasn’t until the Jubilee Line Extension (JLE) began in the 1990s that the next major infrastructure investment or network development took place.

And after the JLE fully opened in 2000, TfL’s focus was on station upgrades and replacement fleets for much of the next decade, until the go-ahead was finally given for Crossrail’s route from Shenfield and Abbey Wood in the east to Heathrow and Maidenhead (and later Reading) to the west.

But as well as Crossrail, building the East London Line extension (north of Shoreditch and south of New Cross) on new and existing railway alignments has morphed something of a backwater of the Underground network into a more useful metro route.

Meanwhile, Thameslink has grown into a massive redevelopment of London Bridge station and an unclogging of a key central London rail artery. And relatively smaller schemes such as the Croxley Rail Link and even the Northern Line Extension to Battersea are under way.

But all will be dwarfed by Crossrail 2. Developing ideas first germinated over 40 years ago, a revised case is now being argued for a new underground railway under London - along the same principles as Crossrail 1 and making good use of existing Network Rail infrastructure.

The pressure on London’s infrastructure and the need to create sustainable economic growth could not be any greater. London’s population is expected to reach 10 million by 2030 - it could be said that Crossrail 2 is a project whose time has come.

In 1970, with the Victoria Line then virtually complete and the Fleet Line (which opened at the end of that decade as the Jubilee Line) in the planning, thoughts turned to what the next big project would be.