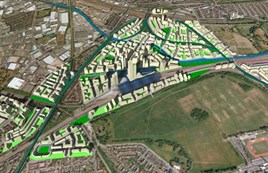 The depot site is located on long-established railway land that until last year had been used as a concrete segment production factory for the core Crossrail tunnels. This took the place of the former locomotive depot and the area known as the ‘Coronation Sidings’.

The site was taken back in March 2014, and with the demolition and clearance of the old buildings now complete, main construction of the depot is now under way (and will continue throughout 2015). Contractors have begun sinking piles for foundations and drilling the boreholes for the renewable energy system (up to 200 metres deep) that will heat and cool the depot.

“The work at Old Oak Common depot is the next step as we gear up to deliver a brand new railway in the capital to provide much-needed additional passenger capacity,” says TfL Director of Operations for Crossrail Howard Smith.

“TfL-run Crossrail will help cut journey times, making it easier for people travelling across the city, and will create jobs and support growth and regeneration along the route.

“When fully operational, this depot will provide vital support to ensure our brand new train fleet offers a high standard of service for our passengers.”

The new depot is being built for TfL by Bombardier Transportation UK Ltd, supporting 260 construction jobs in the UK. When fully operational the depot will support a further 80 UK jobs.

Around 1,100 staff are expected to be employed by the appointed Crossrail concession operator MTR, with many hundreds of jobs created that will use the depot as a base - including train driving and apprenticeship roles. The depot will be in use from May 2017, and will be complete by mid-2018.

The HS2 station at Old Oak Common will be located approximately 15 metres underneath the existing Great Western Main Line, broadly where the FGW and Siemens depots sit right now.

To cater for the number of destinations that will be offered, there will be six platform lines, each capable of accommodating the standard HS2 400m trains.

The original station plans featured a central platform catering for international services via the proposed HS1-HS2 link (now abandoned, as confirmed by Secretary of State for Transport Patrick McLoughlin in March 2014). There would have been segregation for border control purposes in much the same way that Eurostar operates at Ashford International. Whether Old Oak Common’s HS2 platforms can play a role in any future HS1-HS2 link remains to be seen.

The current FGW and Siemens depots that service the HST and Heathrow Express fleets, some examples of which are set to continue serving the West Country until replacements are ordered, will need to be relocated to make way for the Crossrail and HS2 developments.

The HST depot dates back to the 1970s, while the Heathrow Express depot operated by Siemens dates from the 1990s, and these questions will need to be quickly addressed by future Great Western franchisees in the latter part of this decade (if not before). A solution possibly lies on the former Eurostar North Pole site, in the facilities that will not be used by IEP trains.

As the visualisation suggests (page 17), the combined HS2 and GWML/Crossrail stations make for a well-planned site, sandwiched by the two main depot sites. It even includes some much-needed green space around the station, which may help the area live up to its name.

There are also separate proposals for an adjacent London Overground station. TfL has been consulting on three options to better connect Old Oak Common with its burgeoning heavy rail network, with the results expected in the first part of this year. One option has already been discounted, due to the need to build over the Crossrail depot. The need to provide sufficient capacity not only for the Overground routes and the Southern South Croydon-Milton Keynes trains, but also for freight, is a key factor.

New platforms could potentially be built by Old Oak Lane (with connecting walkways to the HS2/GWML station), although TfL has yet to make a final decision on its plans.

Another plan that is currently under consideration at the very highest levels at the Department for Transport is that of a new line linking the Great Western and West Coast Main Lines at Willesden Junction.