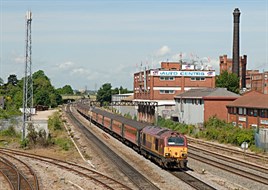 Let’s risk some ‘blue-sky’ thinking. Could we create a better scheme than Crossrail to cross London west to east at one-tenth the cost and with three times as many benefits? And could we get the scheme working in one-third the time that Crossrail will take?

The context is so simple - yet it still seems to be an unfamiliar concept to Londoners: a train parked in a city terminus wastes space, serves no good purpose and earns no money. A train which runs through a big city earns money all the time and serves people well.

Look at Belgium: trains run through Brussels, efficiently and helpfully. Contrast London, still with ten wasteful and unproductive termini. At any moment, dozens of trains are parked on valuable land, earning nothing. There is only one good example of through trains in London: Thameslink (First Capital Connect).

This north-south route was a much harder link to create than east-west links - the River Thames was in the way - and a neglected 1-in-29 freight railway lay there for years almost forgotten. Yet we now have frequent trains running 100 miles from Bedford to Brighton through London - an amazing transformation.

Of course, Thameslink/FCC is not perfect: the ‘negative thinkers’ restricted trains to eight coaches; insisted on an unattractive, uninspired suburban design for coaches; and allowed half the capacity to be taken up by inner-suburban trains instead of serving other parts of the South Coast. All hopes are placed on Phase 2, ‘Thameslink 2000’: all-singing, all-dancing and costing billions. ‘2000’ is now a sick joke: the vast costs were not forthcoming… perhaps by 2012?

This is the best context in which to examine Crossrail and its £16 billion  projected cost. In this plan, we jump straight to the all-singing, all-dancing scheme. Britain seems good at producing fantastically expensive plans which MAY come to fruition in the long term. We seem to be much less good at finding simple low-cost solutions. I’d like to suggest a ‘Mk 1’-style solution to ‘Crossrail’. But despite the much lower cost and much shorter time-span, it will have three major advantages over the current Crossrail plans. By all means build the high-cost Crossrail – but let’s start with a simpler, quicker scheme.

My plan is simple. In essence, it involves seeing how the railway between Paddington and Liverpool Street was used 100 years ago. Trains ran through Paddington, eastwards to the City of London. The tracks are still there! And GER trains reached the same railway with tracks through Liverpool Street station to run westwards (see Railway Junction Diagrams, 1913). My plan involves just this.

We hit a problem at once - negative thinkers will give up quickly. ‘Transport for London’ does splendid things - but the middle word creates a problem. We need the national government to state clearly: “Transport through London should take preference over Transport for London.” In simple terms, longer-distance journeys should have priority. This needs agreement. We will need to cut through the complexities of several privatised concerns in the cause of the best transport system we can create at reasonable cost.

To create space for through trains we need to terminate the ‘Hammersmith & City’ trains from Hammersmith at Paddington, to create six to eight paths per hour. This is no great hardship: it is a short branch line and it is clear that trains from Bristol and Heathrow deserve priority. And we will need to terminate Metropolitan Line trains at Baker Street, as was normal until recently - to create more track capacity.

The Circle Line is more problematic. My plan is based on the Circle Line ceasing to be a circle. It has been so slow and unreliable in recent years and it is duplicated by other routes. To compensate for this, we could allocate some millions of pounds to increase capacity on the Central Line - it runs almost parallel, and less than a mile away from the Circle Line. But there are other alternatives if this would be too much to bear.

So, we have a two-track, relaid railway from Paddington to Liverpool Street. We will relay two tracks into Liverpool Street main line station - this should involve nothing more serious than reopening a tunnel and removing some shops.

The tracks were present 100 years ago. Soon, these tracks could be waiting for a new train service.

The trains will run in a similar manner to Thameslink/FCC trains: fast outside central London; slower and with quite frequent stops in central London. In this way, many passengers will get direct services instead of having to use the Tube. Visit Brussels to see how well this works. Twelve trains each way per hour should cause no problems - a train every five minutes. At the start of the service, we’ll not plan for more to allow time for congested loading and unloading of the trains - but it may prove possible to increase the frequency of trains. One great advantage will be ‘same platform’ connections between trains.

So there will be 12 paths (or eight if we insist on Circle Line trains continuing). I suggest two paths should be Bristol to Norwich, twice an hour, with a total journey time of about four hours. Two paths per hour should be from South Wales - one train from Cardiff to Colchester and Harwich (provided ferries across the North Sea show signs of revival); and one train from Swansea and Cardiff to Colchester and Clacton. (This assumes that Mk 2 Thameslink really will reach King’s Lynn - if that is ‘cut’, this could plan for a train from Swansea through Liverpool Street to Cambridge and King’s Lynn instead of the Clacton route.)

This is only one-third of the capacity! Yet already there are much more attractive routes than the high-cost Crossrail proposal: we go far beyond Shenfield.

Next to be tackled are the airport services: currently Paddington to Heathrow and Liverpool Street to Stansted. Paddington is the most awkward London station to reach, and in a ‘dull’ part of town. So a direct service that runs further east, reaching Euston Square, King’s Cross and the City of London, will be widely welcomed. Similarly, trains to Stansted which travel only from the City of London will be much more useful if they start further west. So I propose, initially, a through service, every 15 minutes, from Heathrow to Stansted. In the longer term, these trains might start further west, at Reading, and travel north to Cambridge.

There are four other paths still to be allocated - yet we have already massively improved trains to two of the major airports and ten major cities - all at a cost that is tiny by comparison with Crossrail. For the other four paths I suggest we use two for semi-fast trains from Southend Victoria and Shenfield, to Reading and Oxford. Again, this would give the great assets of direct access to the City of London from Oxford, and direct access westwards for travellers from Essex, plus easier interchanges in London.

Initially, I’d like the two other paths to be left ‘unallocated’ to ensure that any teething problems do not lead to build-up of delays. They could be invaluable for allowing paths for ‘specials’: football specials; luxury specials; school specials etc. And new routes could be discussed - should places west of Bristol be added to the scheme? Norwich to Exeter and Penzance sounds attractive! We can’t say ‘the sky’s the limit’, but we could dream of Land’s End as the limit…

Back to earth – and the Circle Line. If the protests are too great at the proposal to axe the northern part of the line, it would be possible to offer various concessions. For example, instead of closing the smaller stations on the Circle Line, the Reading-Southend trains could call at them, as long as they did so fast! The old tracks from Moorgate through Barbican could be used for slower trains, and maybe passing loops could be created at Baker Street and/or Great Portland Street.

But if we have to keep the Circle Line trains running, this still does not seem to invalidate the other proposals. We would need new trains with better brakes and greater power - and probably more loops - but with positive thinking it can be done.

Negative thinkers will raise problems over sources of power: for example, we will need dual-powered trains to travel west from Paddington. It’s not insoluble - just another factor to consider. We will certainly need the old, bumpy tracks replaced.

What about the signalling? The clearances? The length of platforms? There is a simple reply: how many millions do you need? We’ll do this as cheaply as we can, but all these added costs are ‘peanuts’ by comparison with Crossrail’s £16bn costs. Surely it’s worth looking hard at the scheme rather than rubbishing it?

My plan would come sooner; it will serve more people and places; it will link with Eurostar. Let’s start planning!