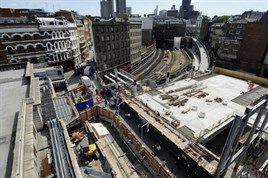 2011 began uncertainly for Crossrail, with the shock announcement in January that Chief Executive and former High Speed 1 Chief Rob Holden would be leaving the project, just weeks after the project gained final approval from the Government.

At the time, Holden put the decision down to feeling “unable to commit to such a long-term project” (RAIL 662). After serving a notice period he finally left in June, to be succeeded by Andrew Wolstenholme, a former director of Balfour Beatty.

Despite major changes at the top, 2011 has also seen major progress on the ground - with the finalisation of key station contracts, the construction and imminent opening of the UK’s first tunnelling and underground construction academy (TUCA), and significant changes to the landscape at many of the major central London sites.

Rumours that the full 118km route (from Maidenhead and Heathrow in the west to Abbey Wood and Shenfield in the east) was to be cut, with trains turning back short of Maidenhead, were dismissed in June by Crossrail Programme Director Andy Mitchell.

“As announced in the Comprehensive Spending Review last year, Crossrail will be delivered in full,” he said. “Services will commence through the central tunnelled section in late 2018, followed by a phased introduction of services along the rest of the Crossrail route thereafter.”

Mitchell added that the detailed opening strategy would not be finalised for “several years”, so it could be substantially longer before the route in its entirety is fully operational.

Crossrail has been working with Hammersmith & Fulham Council to draw up regeneration plans for Old Oak Common, where a transport interchange between Crossrail and the High Speed 2 link is planned. The station link will also connect existing north and west London suburban routes and the Central and Bakerloo Underground lines, as well as providing interchange to Heathrow Airport.

These valuable transport links are expected to result in some 10,000 new homes being built in the area, effectively reshaping west London. The regeneration plans, drawn up by architect Terry Farrell & Partners, were submitted to the Department for Transport as part of the HS2 consultation, which closed on July 29.

The first of the station construction sites was Canary Wharf, where enabling works began in 2008.

Crossrail is delivering the station in collaboration with the Canary Wharf Group, owner of much of the Docklands business district. CWG contributed £150 million towards the project, with Transport for London and Crossrail stumping up the remaining £350m.

The station is equivalent in size to the adjacent One Canada Square building (the second tallest building in the UK) lying on its side, and is being built within the dock itself following extensive works to drain millions of gallons of water.

Dock excavation in readiness for station construction was completed in June, almost two years to the day after work began at the site. The deepest point, at Crossrail track level, is an astonishing 28 metres below the dock bed itself. The first Tunnel Boring Machine (TBM) will pass through the site in autumn 2012, on its way from the Limmo Peninsula en route to Farringdon (Drive Y).

Farringdon station is a crucial transport hub. With about 50 million passengers each year, the station is the fourth busiest in the UK - with London Underground platforms as well as northbound and southbound national network platforms that are also used by Thameslink services.

At £375m, it will be the most expensive of Crossrail’s stations to construct.

Originally opened in 1863, it is Grade II listed, meaning all alterations require permission from English Heritage and the London Borough of Islington. Additionally its location, where London clay meets sand, means that foundation and underground construction is particularly difficult.

The station is also where Crossrail meets the Thameslink Programme, meaning that the two projects, despite running to entirely different timescales, must be carried out alongside each other, with plans and designs having to be remade.

The historic station frontage is being restored, while a new concourse and entrances will enable greater passenger flow and space - even more necessary when Crossrail services begin in 2018.

Work to receive Crossrail services at Farringdon is making good progress, with essential demolition such as Cardinal Tower and Cardinal House (the site of Crossrail’s concourse) now complete, and piling work (which began this summer in preparation for the construction of Crossrail’s Eastern Ticket Hall) also under way.

Work carried out at Farringdon in advance of Crossrail has involved future proofing of the integrated ticket hall (ITH), including a redesign to make it wider and larger to accommodate additional passenger flows.

Geotechnical surveys have been carried out for piling and tunnelling works, foundations have been altered, and sewer systems have been diverted to make way for Crossrail escalators. A 30 metre-deep lift shaft (to connect the ITH concourse and Thameslink’s Platform 3 with Crossrail’s cross passageways) has also been constructed.

With the Thameslink ITH due to open in December, Network Rail has certainly had its work cut out to deliver a redeveloped station at Farringdon, while continuing preparatory works for Crossrail.

The £1 billion package for Tottenham Court Road includes expanding the existing Tube station, and the construction of a new western ticket hall. Work began in 2009.

Utilities have been relocated beneath a flurry of construction activity above ground, which has involved the demolition of several buildings to make space for the new station. The work has resulted in the station being closed since April, although it is on schedule to re-open by the end of the year.

During June and July, 11 columns for piling (50 metres long and two metres wide) were sunk at Tottenham Court Road to support a new private development above the station on the west side of Charing Cross Road. The largest piling rig in Europe was used in the project.

At Tottenham Court Road’s western site at Dean Street, archaeological investigations have uncovered fragments of Roman pottery and numerous 17th century artefacts, including a clay pipe, pottery and bricks. The remains of several brick buildings were also found, believed to be from the mid-to-late 18th century.

Cellar remains demonstrate that since the 17th century ground level has risen by around three metres, as a result of building construction with removed soil redistributed on roads and yards. Domestic waste found at the site is being examined by experts, to ascertain the lifestyle and social status of previous inhabitants.

Also unearthed were 2.7 tons of ceramic and glass vessels, believed to be associated with Victorian firm Crosse and Blackwell, which occupied a building on the site until the 1920s.

Walling and beam works for the portal box at Royal Oak are now complete, with excavation and base slab construction under way.

The portal, due to be completed early next year, will be the site of the launch of the first Tunnel Boring Machine (TBM) from Royal Oak to Farringdon (Drive X). It is due to begin tunnelling its way beneath London in spring 2012.

Current work at Liverpool Street involves the demolition of buildings at Moorgate (now complete) and the demolition of the adjacent Moorfields (to be complete this autumn). Utility diversions are also under way.

Archeological digs here have also uncovered some fascinating insight into life in the St Mary of Bethlehem hospital, a psychiatric hospital whose shortened nickname was the origin of the word bedlam, which operated from 1569 until the mid-19th century. More than 100 skeletons were exhumed, which will eventually be reinterred in a cemetery.

The UK’s first tunnelling and underground construction academy (TUCA) has been built at Aldersbrook sidings, near Ilford, and is now in the final fitting out stage, ready to open its doors to the first batch of students eager to obtain their ‘tunnel safety card’ this October.

The academy will initially offer National Vocational Qualification Level 2 in tunnelling operations and an associated NVQ3 supervisory course. About 3,500 people are expected to pass through TUCA’s doors over the coming years, while in total about 14,000 will be employed by Crossrail across all sectors at the peak of construction between 2013 and 2015.

By investing £7.5m in the project and overseeing its construction, Crossrail intends to leave a skills legacy in the form of the academy, which will operate independently, training staff for future UK tunnelling projects such as High Speed 2 and the Thames Tunnel scheme.

TUCA will be equipped with an underground environment, hands-on training facilities and conventional teaching rooms. The only other academy of its kind in Europe is in Switzerland.

The National Skills Academy for Railway Engineering (RAIL 676) will also have a base at TUCA, providing key skills and training to those studying towards a nationally-accredited qualification. The academy is being backed by the government, which has provided £5m towards the project.

The academy opens its doors for the first time this month, heralding a new era in underground engineering and skills. As we move towards 2012, and the first TBM begins to carve its way beneath the capital - its laborious progress trackable online - we can be assured that exciting times lie ahead for London’s Crossrail project.